Avalanche Cryptocurrency (AVAX) is a token that runs on the blockchain network of the same name. It was created to accelerate transactions, create smart contracts and DApp apps. It appeared in the fall of 2020 and rose in price from $4 to $125 in just over a year. As of the end of December 2021, it is one of the top 10 digital coins by market cap. No surprise that investors are considering buying or mining AVAX.

Below we will look at what this coin is, what it is for, how the price has changed, and what future forecasts experts give in terms of rate growth. Let's find out if Avalanche (AVAX) cryptocurrency can be mined, what it takes, and where it's easier to buy the token.

Overview and purposes of Avalanche creation

The developers' goal is to create a simple and convenient network for the exchange of digital instruments with the ability to trade/exchange cryptocurrency, as well as to control smart contracts.

Avalanche Cryptocurrency (AVAX) has been in operation since September 2020. It is used to manage the platform, pay rewards and conduct other transactions.

It is co-founded by three people. One of them is Emin Gün Sirer, who has a strong background in distributed systems design. The project was developed together with Maofan ‘Ted’ Yin and Kevin Sekniqi, who are specialists in programming.

The purpose of a token

The owner of Avalanche (AVAX) gets access to the platform, decentralized trading and instant transactions. It makes it easier to run dApps (programs that are built on blockchain technology) and to take advantage of large projects (e.g., cooperation with Deloitte).

It’s also possible to pay fees to validators, taking into account the amount of contribution (a validator is a token owner, who manages his node). To get this status, you need to have 2,000 AVAX or more. A node, in turn, is simply a computer running special software.

The structure of AVAX

The cryptocurrency is built around the system of three built-in blockchains protected by a single protocol. Each of them is responsible for a specific sector and is part of separate subnets:

The usual view of Avalanche (AVAX) mining is not provided due to the lack of support for the PoW algorithm, which is built on the need to solve the problem to form a block.

The maximum number of tokens is up to 720 million, of which half is issued by the developers, taking into account the planned schedule. By comparison, Bitcoin has 21 million coins.

To increase interest in the cryptocurrency and profitability, fees paid for transactions are burned, which is compensated by the creation of new coins.

As an alternative to mining, the developers have provided staking - a system that allows you to earn income by adding tokens to the network. To start the process, you need to add 2,000 AVAX and become a validator.

In terms of equipment, there are no strict requirements for miners. Staking can be done on an everyday computer/laptop. You are allowed to add cryptocurrency with another validator who has invested the required amount. The advantage of Avalanche (AVAX) staking technology is that there are no risks caused by network failures.

The average yield of staking reaches 11%.

Prospects and Forecast for Avalanche (AVAX)

Before buying this token, it is important to analyze the features and prospects of the network and study the forecasts of Avalanche (AVAX) cryptocurrency.

The value of Avalanche depends on a number of factors:

It should be noted that there are negative reviews about AVAX, indicating the lack of growth prospects. But these are groundless and are often left by ordinary users with no reason.

The advantages and disadvantages of Avalanche token

The popularity of the Avalanche network is not only due to the growth of the price, but also due to the advantages of AVAX compared to other cryptocurrencies:

The considered pluses are the basis for the further development of the project and the rate increase. But when assessing the prospects one should not forget about the disadvantages. Among the basic ones are the "youth" of the project and hundreds of competitors. There is a risk that the project will remain a fly-by-night operation.

How the price changes on the chart

It's worth mentioning the price issue in the review of Avalanche (AVAX) cryptocurrency and take a look at the chart. 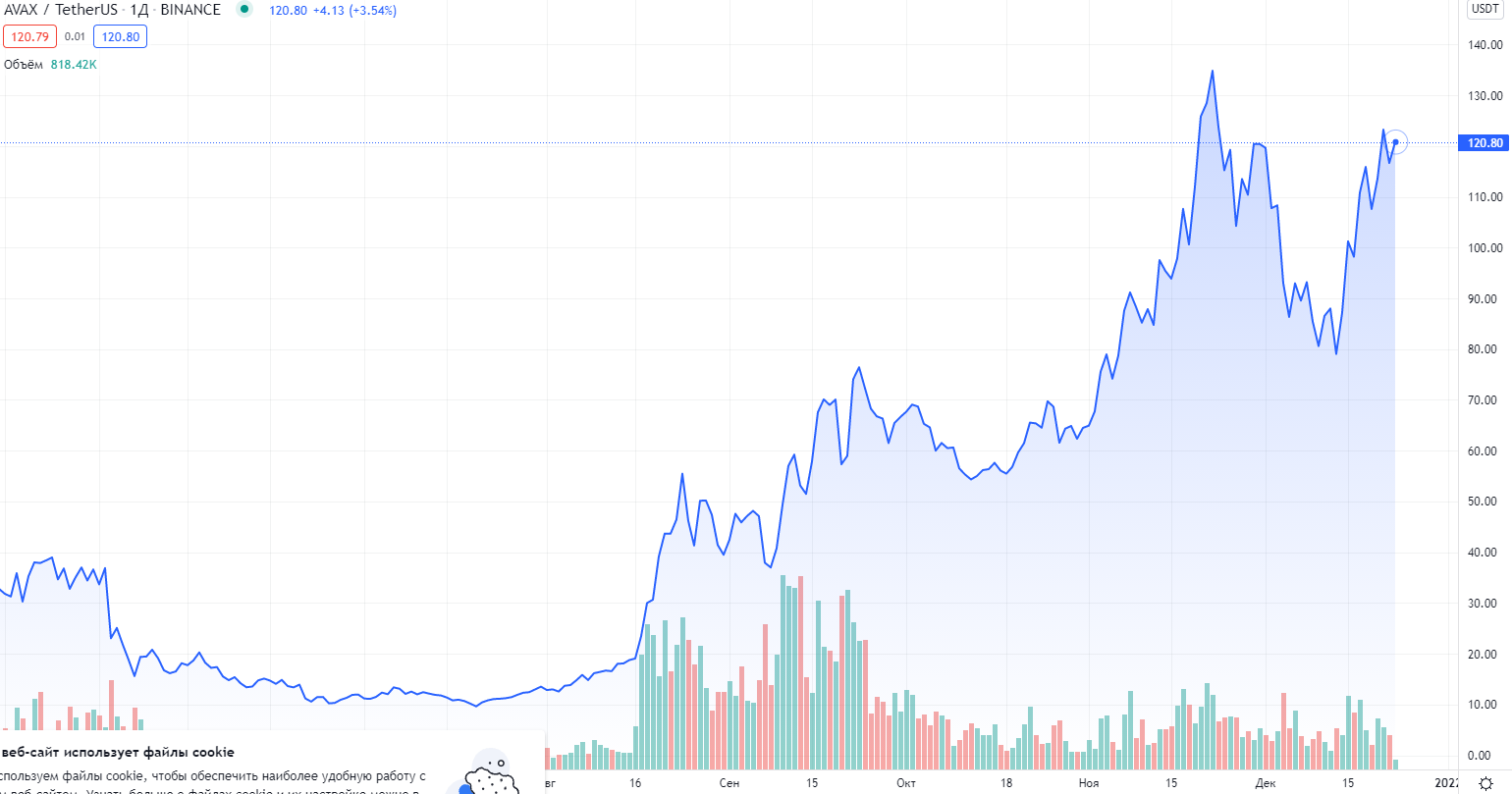 This means that the cryptocurrency has increased in price 24 times in just one year. That trend is expected to continue in the near future and opens up the prospect of making money.

You can use Broex to store AVAX cryptocurrency. This option is the most promising and convenient for users. Its advantages for storage are:

Where to buy Avalanche

To get AVAX token, you don't need to invest a large sum, take risks and engage in staking. There is a simpler way - the purchase of cryptocurrency online. When choosing a platform, you should give preference to platforms with a good reputation, low commissions and clear interface.

The best solution is buying Avalanche cryptocurrency on Broex. This is a reliable and time-tested platform with a large selection of instruments.

If you are interested in a quick and easy way to buy AVAX tokens, purchase with Broex is the best solution. It’s a reliable intermediary for those who want to invest money profitably, avoid the risk of fraud and get income already in the short term.

The review of Avalanche cryptocurrency shows the token's potential in terms of development and growth of liquidity in the market.

Unlike other active projects, it has an improved consensus mechanism. In contrast to other cryptocurrencies, it doesn't need a leader to achieve consensus. All nodes are used to process/verify transactions, so they are completed instantly.

The high speed of transactions and lack of scalability issues are also worth highlighting. Despite being "young", there are already thousands of validators participating in the network, supporting it and ensuring its further development.