The first cryptocurrency has made a splash in the world of technology and finance. However, it has drawbacks that haunt crypto enthusiasts. These disadvantages led to the emergence of a coin like BCH.

Bitcoin Cash (BCH) appeared on August 1, 2017, as a result of a fork (branching of the blockchain network with changes, resulting in a new cryptocurrency). Unlike classic bitcoin, in this network the block size is increased to 32 megabytes, which partially solves the problem of scalability, which is relevant to BTC.

Despite the fact that initially BCH cryptocurrency was not so popular, the situation has changed over time.

Differences from Bitcoin and benefits of Bitcoin Cash

Block size. Perhaps the most famous difference between the original Bitcoin and Bitcoin Cash. To start with, what is a block of a cryptocurrency network? It is a set of data of completed transactions in the network - Bitcoin, Bitcoin Cash or other. Each new block is added to the previous one without the opportunity to change it. And each one contains data about the previous state of the network. This is what blockchain is all about. In the Bitcoin network, the block size is 1 MB. A curious thing is that originally there was no limit - it appeared under Satoshi Nakamoto in 2010.

The Bitcoin community still adheres to the limit. They explain here: there's simply no need to increase the size. SegWit technology allows double the bandwidth of the network, and small transactions can be processed outside the main chain. For example, using the Lightning Network. Bitcoin Cash decided to go a different way, boosting the performance of the network by increasing the block size. Initially, the limit was 8 MB, then 32. On the one hand, it really helped to do without Lightning, SegWit and other additional solutions. On the other hand, the requirements for node operators have grown. They need more computing resources, which means the network is becoming more centralized. By the way, miners can also be considered as a type of node operators. Soon, not only the advantages but also the disadvantages of the approach became apparent.

In 2019, the mining company BTC.TOP took control of 51% of the computing power. This allowed it to manage the network at its discretion, but the situation was quickly resolved. Moreover, BCH is still less popular than its "big brother," and transaction data for blocks rarely accumulates more than 2MB.

Subsequently, the Bitcoin Cash team encountered the same thing that Bitcoin developers once did. The group, led by Craig Wright, demanded blocks be increased to 128 MB. Some of the developers disagreed, and soon another split took place. Bitcoin Cash stayed in line, Wright got his own Bitcoin SV coin, and the world also saw Bitcoin ABC - it was later renamed eCash.

Mining complexity. The more computing power mined in the network, the higher the complexity of "mining" new blocks by miners. It applies to both BTC and BCH. The difficulty of mining blocks in networks adapts to the changes in power every 2016 blocks. If less than 2016 blocks are mined in two weeks, the complexity goes down. If more, it goes up.

But BCH developers added a new feature - emergency difficulty adjustment algorithm, if less than 6 blocks are mined in 12 hours. The solution is designed to secure the network, but is also used by unscrupulous miners in collusion. Their tactics are simple: they leave the network en masse, waiting for the emergency difficulty drop, and then mine the next 2016 blocks with relatively small resources. 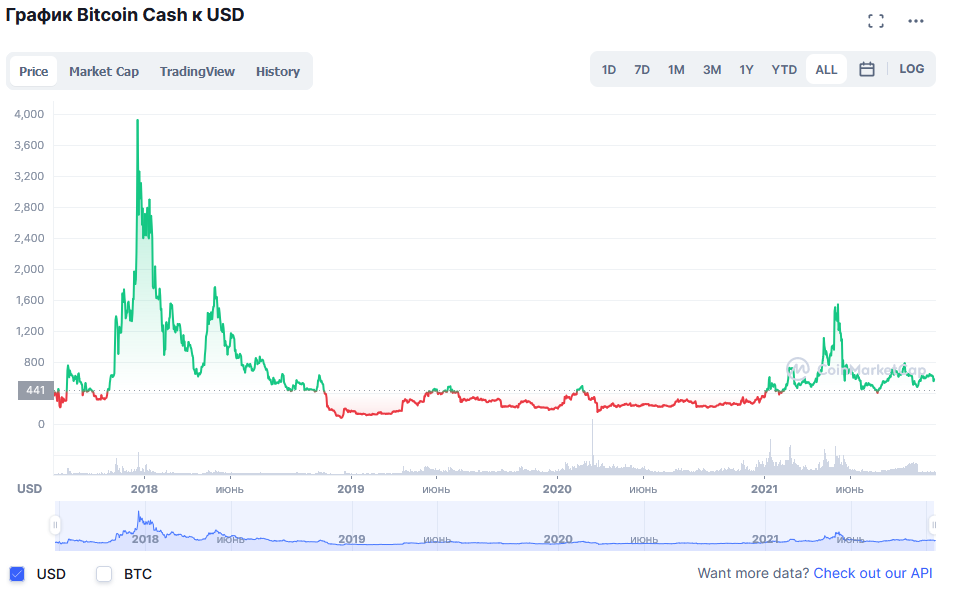 Despite the fact that the price of BCH is far from what could be seen in 2018, the interest in the cryptocurrency is constantly growing. After all, BCH solves the problems associated with bitcoin and its application. Here are a few characteristics of Bitcoin Cash to look out for:

Roger Ver is the mastermind behind the blockchain expansion, the main promoter of Bitcoin Cash and the owner of bitcoin.com, the cryptocurrency-using website. In the past Roger actively promoted Bitcoin, earning himself the amusing nickname Bitcoin Jesus. Roger's high schoolmate is Jesse Powell, the founder and CEO of the popular cryptocurrency exchange Kraken. However, Jesse is not involved - at least publicly - in the development of BCH himself.

Another prominent IT market player who joined the "cash" at the start is Amaury Sechet, the ex-Facebook engineer. Like Craig Wright, today Amaury runs his own project, cryptocurrency eCash (Bitcoin ABC).

In general, as we said, there are several groups of developers working on BCH.

Where BCH is used

The cryptocurrency is used for the following purposes:

Initially, BCH was almost an exact copy of Satoshi Nakamoto's brainchild in terms of its functionality. However, in 2020, the team took it upon itself to incorporate some of the programming codes that were blocked in the original source.

Expectations for the near term are high. Full-fledged smart contracts may take hold in the Cash ecosystem. This means that BitCash has the potential to become more like Ethereum - with its own DEX, NFT, tokens, lending services, and other elements of a decentralized marketplace. Of course, this kind of selection noticeably expands the possibilities for coin owners.

Another feature of BCH is the cross-platform system. The Bitcoin Cash and Ethereum networks are connected by a so-called sidechain. The chain, called Smart BCH, is compatible with the Ether Virtual Machine and allows Ethereum-based apps to be ported to Bitcoin Cash. It's about the same way Japanese developers' PlayStation games are ported to Windows.

Mining and emission - that is, the creation of new coins after blocks are mined - everything is simple. Like the BTC network, BCH has a limit - a maximum of 21 million coins can circulate. Admittedly, 15 million were minted in the early days of Bitcoin Cash. The reason is that the cryptocurrency exactly copies data from its progenitor's blockchain. These coins went to the owners of the original bitcoins.

As with Bitcoin, Bitcoin Cash has a typical halving procedure - halving the rewards for miners who mine a block. Right now the reward is 6.25 BCH, and by 2025 it will drop to 3.125 BCH.

The mining algorithm for both coins is identical, which is SHA256. This brings benefits to miners - both assets can be mined on the same machine. However, this is what contributes to explicitly cheating, which we talked about in the "Mining Complexity" section.

In terms of investing or even short-term trading, Bitcoin Cash is quite attractive. The project is constantly evolving and there are several teams involved, which allows you to get a higher quality product as a result.

Despite criticism from some members of the cryptocurrency community, Bitcoin Cash has been in operation for several years, which has proven its sustainability and relative stability. If more users pay attention to the cryptocurrency in the long run, given its better scalability and speed, the price of the token may rise to new values.

Bitcoin Cash is worth buying both short-term and long-term. For traders and depositors, the token can be useful as part of a portfolio or even as an independent asset. BCH has a number of advantages over traditional bitcoin, which makes the token interesting for all categories of users.

Where to buy cryptocurrency BCH: the best way to exchange rubles for Bitcoin Cash

Buying cryptocurrency is almost always fraught with non-trading risks. For example, some platforms are hacked. Other scammers steal clients' money. Therefore, it is very important to pay attention only to those platforms that operate in good faith and use advanced security tools.

Broex can be considered as one of the ways to buy BCH cryptocurrency profitably and safely at a market price. It is a European-registered platform with a license to conduct financial transactions.

Broex has concluded a strategic partnership agreement with Binance, thanks to which the platform's clients have access to almost any token available on the well-known platform. Moreover, users can submit requests to add new cryptocurrencies, expanding portfolio opportunities.

In addition, Broex is also a reliable wallet for storing tokens. Cryptocurrency is located on separate servers without access to the Internet. Thus, clients' digital assets are protected from theft.

How to check transactions in the BCH network

Before getting into the details of buying Bitcoin Cash, here's a handy and pretty important tip. As you conduct transactions, you need to make sure that they have actually reached - or are reaching - the right address.

The Blockchair service allows you to track other participants' confirmations of transactions and find out their status. It's a popular solution that also gives you more insight on the status of all the top blockchains. Blockchair is translated into many languages.

So what can I do to find out the status of a transaction? It's pretty simple. Broex Wallet or other service provides the user with txid - the hash of the operation. If you have already chosen the right blockchain on Blockchair website - BCH - then just paste the hash into the search box at the top. It starts with the prompt text Search for transactions...

Now you have all the necessary information about the payment: who, to whom and how much was sent, what is the fee of the network, the number of confirmations, the time of sending and so on.

Blockchair is available as a website, browser extension, and onion version for Tor browser users - those who prefer maximum anonymity.

As a way to buy BCH cryptocurrency at a market price profitably and safely, you may consider Broex. It's a European-registered platform with a license to conduct financial transactions.

Broex has concluded a strategic partnership agreement with Binance, thanks to which the platform's clients have access to almost any token available on the well-known platform. Moreover, users are able to submit requests to add new cryptocurrencies, expanding portfolio opportunities.

In addition, Broex is also a secure wallet for storing tokens. Cryptocurrency is located on separate servers without access to the Internet. Thus, customers' digital assets are protected from theft.

The advantages of working with Broex include:

The Bitcoin Cash cryptocurrency is a promising tool that allows you not only to speculate on digital assets, but also to count on profits from long-term investments. Having all the advantages of classic bitcoin, BCH offers several refinements that make it faster and allow the network to scale in the future.