Dogecoin cryptocurrency (DOGE) is a different animal than either of the majority of cryptocurrencies. It was created as a joke, a protest against the unjustified growth of the price of other digital assets. But eventually it became one of the most famous crypto projects, ranking among the top 15 in terms of capitalization (the total value of all issued coins).

Read below how easy it is to buy or sell Dogecoin cryptocurrency, how the price of DOGE changed, and whether this asset has prospects.

The history of emergence

The Dogecoin developers did not expect the coin's rate to skyrocket so dramatically over time. Their approach was deliberately unserious. As programmers, Billy Marcus and Jackson Palmer simply wanted to create a meme token, or joke coin. So they didn't try to invent something special, and simply copied the code base of another project known as Litecoin.

The project quickly gained popularity, and at some point even surpassed Bitcoin in terms of trading volume. DOGE coins were bought mainly to support the joke project, but also to be used as donations for the useful users of the Reddit and Twitter social networks.

Afterwards, DOGE was almost forgotten - only a small number of enthusiasts used it. While there was a crypto winter in the market (a long period, when cryptocurrencies mainly fall in value), the rate of the asset hit the "bottom".

In 2021, the Dogecoin cryptocurrency experienced a thousand percent increase in value. This was due to Elon Musk's tweets, who suddenly decided to popularize the joke coin. Also, DOGE began to be often mentioned by other media personalities. All this led to a new rise in popularity. But this time everything went much further.

Now Dogecoin is not just a joke cryptocurrency, but one of the most popular assets. Some stores and companies even accept it as payment for goods and services. In this regard, the development of DOGE has continued. With the support of Elon Musk and Vitalik Buterin (creator of the second most popular cryptocurrency Ethereum), the project is being improved and enhanced.

It's impossible to accurately predict the future of DOGE cryptocurrency and its exact rate, but we can assume that in the long term, the coin will remain one of the main digital assets.

If the current price of the Dogecoin cryptocurrency is compared to the rate at which it was traded before 2021, it may seem that the value was always the same before that. In fact, the asset has had its ups and downs. For example, lucky users could exchange purchased DOGE back into rubles or dollars in 2018, getting 3 times more money than was invested.

But, of course, compared to 2021, the described events seem quite insignificant,  as anyone who decided to buy DOGE cryptocurrency in 2020 or earlier could withdraw 280 times more money in 2021 than they invested. In just a few months, the price went from around $0.0025 to $0.7 per coin, and even slightly higher. Even now, the value of the asset is about 66 times what it was back in 2020. 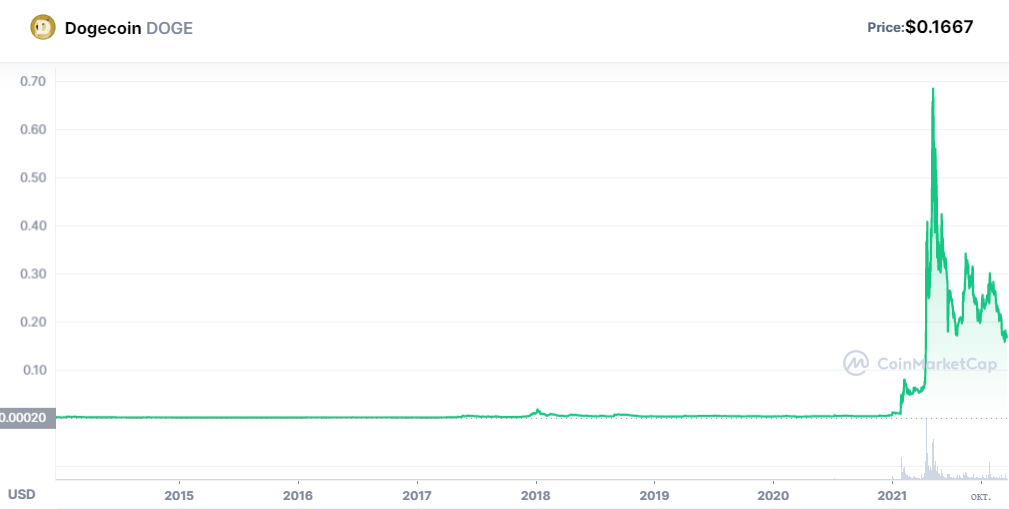 The prospects of investing in DOGE

You can exchange fiat money (rubles, dollars, and other traditional currencies, issued by the states) for DOGE cryptocurrency at any time, for example, on Broex, which will be discussed below. But to understand whether it is worth it, you need to analyze the following factors:

It's important to understand that the DOGE exchange rate will probably rise and fall many more times. Therefore, most likely, everyone will be able to get a profit by selling Dogecoin cryptocurrency. However, whether you should buy it or not is up to you to decide. Even experts are at a loss as to the future of such mock digital assets. Therefore, they recommend buying coins only for small amounts, and be sure to diversify investments, i.e., divide funds between different projects.

Where to buy or sell DOGE cryptocurrency

One of the best ways to buy Dogecoin or other cryptocurrency is using Broex exchanger. It belongs to a company that has been officially licensed to operate. Therefore, there will be nothing to worry about when buying or selling digital coins through this platform.

In Broex, the minimum deposit is 1500 rubles. The exchanger also has other advantages:

Broex online support is available 24/7. If you have any difficulties or a question, you can quickly get advice and solve any problem. That's why the exchanger is convenient even for beginners.