Polkadot, or DOT for short, is one of the largest cryptocurrencies in the world in terms of market cap. It's the flagship project by the Swiss Web3 Foundation. It has created a convenient, fully functional decentralized network.

Polkadot aims to provide secure messaging across different blockchains. The cryptocurrency is designed to support two types of blockchain:

How did the cryptocurrency Polkadot originate?

Two former Ethereum leaders decided to create and develop their own project. This is how Polkadot was created, which was developed by Parity Technologies, led by Gavin Wood and Jutta Steiner.

Wood is a blockchain technology developer who was a member of the Ethereum development team. His work led to Ethereum's Solidity programming language which he created.

The Polkadot project was launched with the financial support of Parite and the Web3 Foundation. This company itself was founded in 2015 and originally had no plans to create its own cryptocurrency.

Since its founding, it has been working on developing a software node for Ethereum, a client called Parity Ethereum. After a while, however, Parity Technologies decided to abandon the project and focus on a different one: the Substrate project and Polkadot. In the fall of 2017, the first Polkadot code was published on GitHub.

What is Polkadot (DOT)

Polkadot is a next-generation blockchain protocol. It enables any data to be connected and exchanged between blockchains. Thus, they communicate with each other, even if they work independently.

This token is intended for multiple purposes. First of all, it’s used for decentralized management of the protocol. For this reason, the DOT token enables validators to vote with which they can participate in the decision-making and development of the project.

The advantages and disadvantages of Polkadot (DOT) cryptocurrency

Polkadot has a well-established governance system. Upgrades to the network are enacted autonomously and coordinated on-chain.

In NPoS, validators must constantly respond and maintain a secure and reliable infrastructure. Experts believe Polkadot is an ideal platform for use on the Internet of Things (IoT).

Cons of Polkadot are:

In August 2020, the Polkadot community decided to increase the number of tokens from ten million to one billion. This was done to avoid using countless decimal places.

How the cryptocurrency Polkadot (DOT) works

Tokens are the core of every cryptocurrency. The annual number of DOT tokens increases by ten percent. DOT is needed so new chains of blocks can be launched and linked to the Polkadot relay chain. But they also fulfill other purposes. These include, for example, staking (a way to get rewards for owning cryptocurrency) and updates to the Polkadot network.

The two most important components here are Relay-Chain and Para-Chain. Relay-Chain is the central chain of Polkadot, which ensures security, consensus and interaction between the chains throughout the network.

Relay-Chain coordinates the system and provides security for up to 100 parachains working in parallel. It also has deliberately limited functionality and, for example, - for instance, smart contracts are not supported. In addition, the chain has computer programs that work together with the DOT.  The first Relay Chain blockchain was launched in the spring of 2020. The Polkadot token was deployed in phases.

Parachains are at the center of the Polkadot network. These are the secondary chains through which most transactions are performed.

Nearly 100 parachains are connected to the multichain, which provides high speed. A fully functional system should process up to 1 million transactions per second. In addition, existing blockchains, like Bitcoin and Ethereum, can be incorporated into Polkadot via bridges.

The ability to connect blockchains with each other and provide self-sufficient communication is the main feature of Polkadot. By linking blockchains to Polkadot through its own relay chain, companies are able to interact with other blockchains.

Polkadot is unique among leading blockchain solutions.  It offers:

Parallel processing is achieved by executing transactions in separate shards (groups of records). This fundamentally increases the overall performance of the network. In addition, cross-chain functionality provides the ability to transfer all data or any assets between shards (small fragments of databases).

How Polkadot differs from other cryptocurrencies

Today's network uses standard TCP / IP protocols to communicate and route all the devices and information that passes over the Internet. Simply put, the TCP / IP protocol enables countless devices that are connected to the Internet to communicate with each other in a common language. In contrast, Ethereum speaks Ethereum, Cardano speaks Cardano, but there is no translator between them.

Polkadot solves the problem of blockchains working independently of each other by acting as a standard for interaction between them. This is somehow similar to the TCP/IP protocol adopted for the Internet, except that it provides decentralization.

In other words, Polkadot integrates different blockchains and provides developers with the tools to create a new, decentralized blockchain network.

What are the benefits of using Polkadot cryptocurrency?

Polkadot is easy to work with, design and program - it is secure. In addition, smart parachains with support of contracts can activate high-speed alternative protocols. They enable smart contracts with minimal impact on the overall Polkadot ecosystem.

The creators of Polkadot have identified a clear problem in the crypto world and offer a clever solution. If Polkadot takes over, the system could create a wave of new and innovative blockchain systems. They are secure and can access the resources of the Polkadot validator group, with little cost to run.

Another advantage of Polkadot are bridges, which take over the communication response and guarantee excellent interoperability. Polkadot also offers the following advantages:

DOT's own coin has not been traded on cryptocurrency platforms for a long time.  Today, the Polkadot rate is constantly evolving. It's impossible to predict what will happen in the future. But some analysts have shared their opinion.

The predictions of Coinpedia experts.

They are based on technical analysis (with data taken from cryptocurrency charts as the basis). Analysts believe that the price will be $18.6 in 2022, and the peak may exceed $20. In fact, there is an assumption that the token could hold its value well in the coming years. The exact reason for this development has not been given. In 2025, the rate is expected to be over $35, but the peak price may reach $43.

The opinion of Digitalcoinprice analysts

It coincides with the opinion of Coinpedia in the forecasts.  Experts believe that in 2022, the escalation of prices will not be significant. The average price will be $26. From 2023, there will be an annual rise in the average price of about $10 until 2025.

The Walletinvestor forecasts are based on technical analysis performed by AI.  Walletinvestor's forecast suggests a complete collapse of the project. Walletinvestor views prices falling by more than 90 percent in the next few years. While the forecast is not optimistic, in the case of the DOT, overall losses are anticipated in the near future. This forecast has no explanation, so it's best to treat it with caution.

CoinArbitrageBot has a positive attitude towards investing and predicts price increases in the coming years. Accordingly, the price will reach $17.89 in the coming year, and will continue to rise in the following years. In this case, the forecast is less pessimistic than the first two expert opinions in this list. The expected price by 2024 is over $40.

What is worth remembering is that cryptocurrency markets are too volatile. Therefore, it is practically impossible to make an accurate forecast of a token's price. Any of the experts can make mistakes in their predictions.

The dynamics of the Dot exchange rate 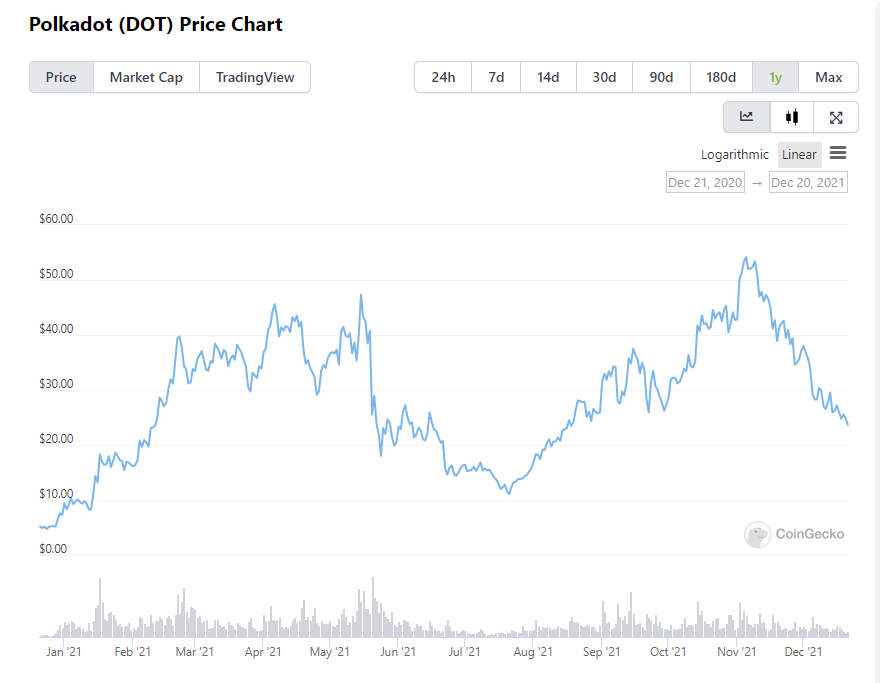 Experts recommend making your own analysis. In doing so, some factors should be taken into account:

Only after that you can make a reasonable decision. You should also be aware that previous price readings are not a guarantee of future profits.

Purchase and transfer of Polkadot (DOT)

The transfer of a DOT is not fundamentally different from a bank transfer: instead of an account number only the recipient's address is used. You can buy Polkadot through various channels and suppliers.

The buying process is simple:

As a rule, trading Polkadot works the same way with all cryptocurrency brokers. The best way to buy DOT is to use the Broex platform. This platform is focused on the Russian segment of the cryptocurrency market. Registration here takes a couple of minutes. The user only needs to provide an email address.

The interface of the platform is as clear as possible, so even a beginner can easily master this trading platform. To enter the website, you can use any device. You need to confirm the registration using your email, where a letter from the platform will be sent. After confirming the mail it is necessary to pass the KYC verification.

Then you can start trading. To buy or sell cryptocurrency, the user must top up the wallet. 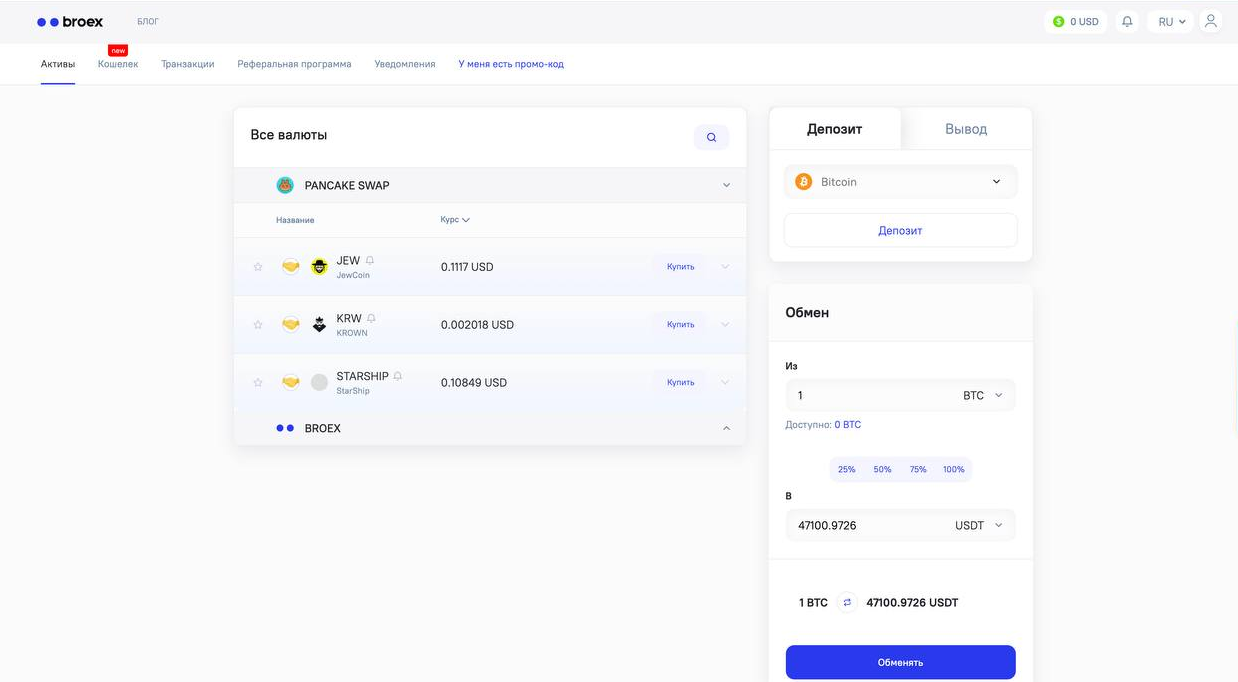