The project was created in 2017, and the main network was launched a year later. The project raised funds through an ICO (initial offering of coins, similar to an IPO on the stock market, when investors buy digital assets of the project, not available to the public). The longest initial offering, which lasted about a year, raised more than $4 billion.

Before the launch of the network, several bugs were identified, due to which this event had to be postponed several times as a result  Mainnet (the main blockchain network) went live on June 2, 2018.

EOS io is a blockchain network created to develop decentralized applications (dApps) on it. The internal EOS token is designed to keep the project running, as well as to pay for nodes (nodes in the blockchain that are responsible for creating new blocks and validating transactions).

The distinctive features of the project are:

There are several ways to use cryptocurrency:

Unlike bitcoin or ether, the EOS token is not offered as a payment method in online stores. Although from time to time, it can be found, for example, in online casinos or at some Forex brokers as a means of payment. This is due to the fact that the project is still less popular than BTC or ETH. 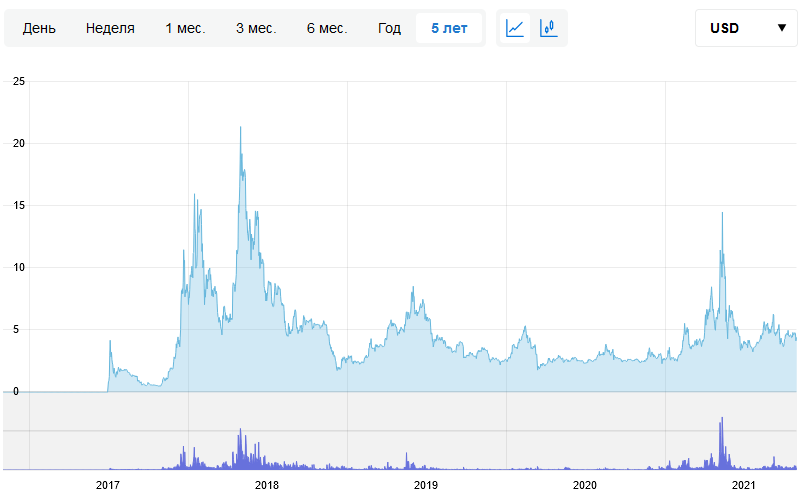 The cryptocurrency reached its peak values (just over $20 per token) in 2017, even before the release of the main network. Since then, the price has only once come close enough to historical highs.

These include the following:

If a user is planning to buy, exchange or sell EOS io, it is necessary to pay attention to how much the team is ready to continue developing the project. EOS has both advantages and a number of disadvantages criticized in the community. Nevertheless, the project's founder, D. Larimer, has the respect of the community. He is called the second Bill Gates.

EOS is considered to be the ‘killer’ of Ethereum. Unlike the latter, the EOS network is all about voting. It is a more flexible model that takes into account the interests of the entire community, not just parts of it.

More flexible smart contracts are another plus for EOS compared to Ethereum. Developers are still cautious about the project, though. Most decentralized applications are still developed on the Ethereum blockchain.

Moreover, the process of creating smart contracts on EOS itself is simpler than on Ethereum. This is another plus in relation to the well-known blockchain developed by Vitalik Buterin.

EOS is a project with potential. Taking into account small price fluctuations, it is suitable for long-term investments with the aim of reaching and exceeding historical highs in price.

Where to buy, exchange, sell and withdraw EOS io

In order to buy any token, it is sufficient to use the services of specialized trading platforms or exchangers. However, here users may face low quality services or even fraud by the administration of such platforms. Therefore, it is recommended to be careful in choosing such websites.

Broex.io is a reliable service for buying and selling tokens

Broex is an EU-registered platform where you can buy, sell or exchange EOI io at favorable prices with minimal commissions. The advantages of cooperation with Broex.io include:

EOS is a blockchain project offering simple and flexible smart contracts. The project continues to evolve since its launch. The team includes developers with experience in companies like Google.