Flow is a new generation blockchain developed by Dapper Labs. The project already has two successful decentralized apps - CryptoKitties and NBA Top Shot. Initially, CryptoKitties ran on the Ethereum blockchain, but due to heavy load on the well-known network, Dapper Flow decided to create its own platform, which would solve the main problems of blockchain today:

How the Flow network works

Continuing a review of the cryptocurrency Flow, we should note that the network by its architecture differs significantly from all modern distributed ledgers. First of all, a new programming language Cadence is used to enable developers to write smart contracts and create decentralized assets.

One of the advantages of this language is that it allows to write legible and comprehensible code. Created programs allow the management of resources and assets through the use of smart contracts.

In addition, blockchain uses a refined Proof-of-Stake mechanism that offers four types of nodes (nodes that are responsible for validating transactions in the blockchain network) instead of one. In this way, it helps reduce the load on the most complex parts of the distributed ledger and achieve minimal fees for any transaction.

Nodes in the Flow network

As noted above, the Flow crypto network uses several main nodes that are responsible for different actions:

Main features of the project Flow

Before turning to the prospects of the cryptocurrency Flow, we should highlight the main features of this network, as they help to determine whether the platform is likely to be attractive to users and developers in the future. The important distinguishing features of Flow include:

In order for the Flow cryptocurrency review to be as detailed as possible, it is impossible not to mention the smart contracts in this network, as they introduce one important feature that gives advantages to developers.

The first types of smart contracts on classic blockchains such as Ethereum had no flexibility. In case of an error, this smart contract did not allow changes to be made. This simple approach achieved an important advantage - trust in the application did not require additional validation, as even the author of the smart contract could not make changes to it.

The issue with using such smart contracts

The main drawback of first generation smart contracts was that it was extremely difficult to create quality software in just one iteration. Many applications with a lot of bugs were created. And there were flaws even in the software, handled by professional teams.

In this connection, the developers expressed the desire to make smart contracts with the possibility of making changes in already created applications in the future. And some teams created special add-ons that allowed bugs to be fixed after a smart contract was deployed on the platform. But this significantly complicated the dApps creation procedure itself. In addition, the credibility of such applications was reduced, since their author could change the terms at any time.

The solution to the problems with smart contracts

The creators of the cryptocurrency Flow went a slightly different way and created a special beta platform. With its help, the developer gets the opportunity to conduct an unlimited number of iterations before the contract is launched into the main network.

In this way, developers have managed to reduce the risk of bugs in smart contracts without reducing the credibility of such apps. They still remain unchanged after deployment, but before launch, teams can run an unlimited number of tests and introduce any changes to the project.

Considering the prospects of any cryptocurrency, it's necessary to pay attention to the following aspects:

Rohma Gharegozlou has little experience in launching serious projects, but his university degree from Stanford speaks in his favor. In addition, he was one of the participants and architecture developers of the Axiom Zen project.

Apart from that, there are other members responsible for the development and marketing part of the project. There are 22 members of the team in total.

The economics of the project's token and staking

Like most similar platforms, the underlying principle of Flow cryptocurrency token economics is to attract the maximum number of validators to the project with minimal inflation. The latter will ensure an inflow of users of decentralized apps in the future due to the low prices of the token itself. At the same time, the project guarantees a high payout in the amount of 3.75% of the entire market capitalization of the project in the annual perspective.

In addition, there is also a system of profitability distribution in the project, with a clear distribution of node roles. Profits vary depending on what role a particular node plays in the network.

Specifically, the reward of node owners is distributed as follows:

In addition, owners of Flow crypto have the opportunity not only to act as various validators themselves, but also to direct their tokens to already existing nodes to receive a guaranteed share of their profits (according to the principle of pool work).

In terms of management, despite the fact that the project belongs to the decentralized blockchains, the developers so far independently make all decisions regarding the development of the network and the creation of new dApps. There are plans to implement a voting system, but the project community hasn't yet gained access to this management tool.

A blockchain under the same name can be used for the following purposes:

At the time of writing this review of Flow cryptocurrency, the blockchain already has agreements or partnerships with the following companies and projects:

At the time of the blockchain launch in September 2020, Project Flow issued special NFT tokens in partnership with NBA - NBA Top Shot. The success of this campaign helped increase the number of users to more than 100,000 in the next few months after the launch.

The idea behind NBA Top Shot is that the platform issues Moments tokens, which represent the right to own small video clips of the best NBA moments. The interest in NBA Top Shot is also spurred by the opportunity to both buy and sell the corresponding asset.

The success of NBA Top Shot

According to the basic principles of NFT tokens, only one holder can own such an asset, and it is not replicable. Interest in the project continued to grow in 2021. For example, a token with a record value of $35,000 was sold on the platform at that time. After that, the maximum price of tokens has steadily increased. For example, an asset with LeBron James' highlights was sold for $47,500, and dunks performed by the same athlete were sold for $208,000.

Conclusions on the prospects of the cryptocurrency Flow

The project is definitely attractive to token holders, considering the well-matched team of developers and marketers, as well as the success achieved in the creation and trading of various NFTs.

As interest in decentralized applications increases, the demand for Flow's services will grow. This will naturally have a positive impact on the value of the token. 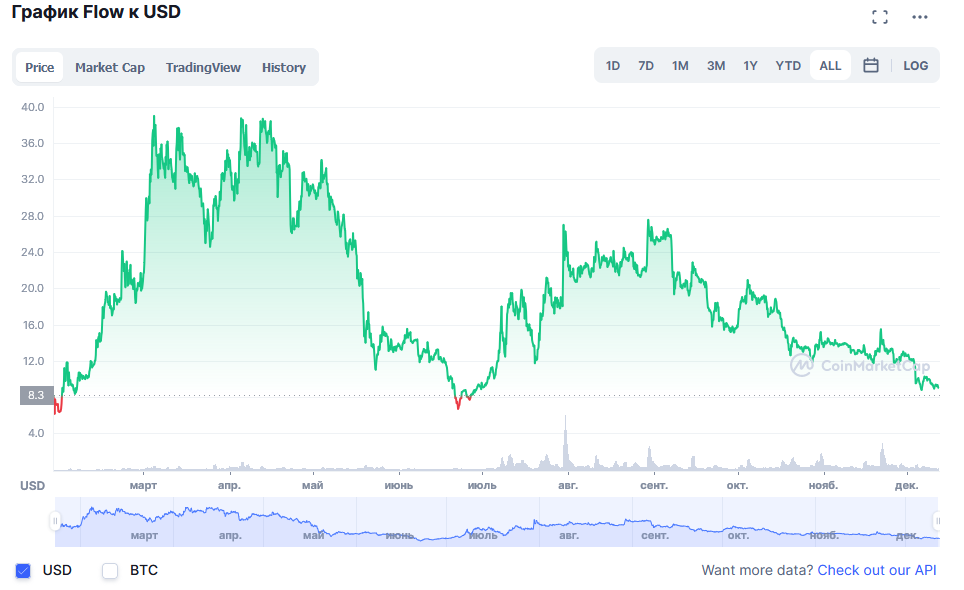 In terms of Flow's cryptocurrency forecast, the current token price at the time of writing is $9.03. Taking into account the historical highs of almost $40 per coin, as well as expanding cooperation with existing partners and attracting new ones will make it possible to update these figures in the future.

In addition, the project provides some improvements in the technical part. This applies both to the distributed architecture of nodes, and the possibility of multiple testing of smart contracts without losing the level of trust. All this will contribute to the growth of interest in blockchain both from developers and users of decentralized apps.

Where to Buy Flow Token

Buying cryptocurrency involves certain risks. To mitigate them, as well as to get additional benefits, it's recommended to buy the coin from the proven Broex platform. Here are some advantages of working with this platform:

In addition to the ability to trade, Broex has a secure wallet for storing tokens. Disconnected from the Internet servers are used as well. Fiat money, as required by EU regulators, is stored on a separate loop.