Litecoin (LTC): an overview of the cryptocurrency, opportunities and prospects The cryptocurrency Litecoin appeared in 2011. Its founder is Charles Lee, a former Google developer. The main motive is to create a token that would be easier to mine (mining cryptocurrency is the creation of new coins by solving complex mathematical problems).

The basis for the creation of LTC was the bitcoin blockchain. Charles Lee adjusted the protocol to make it more difficult for users to create mining pools (grouping equipment to increase cryptocurrency mining potential).

Considering that Litecoin is essentially Bitcoin with minor changes, its distinctive features are in many ways similar to the first cryptocurrency:

Where Litecoin cryptocurrency is used

The token is used for the following purposes:

LTC price and prospects of the coin 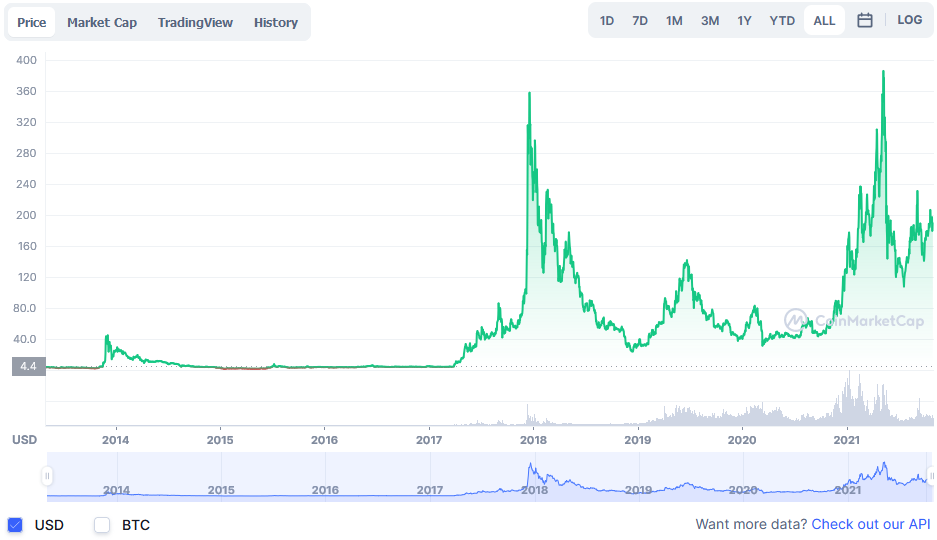 Litecoin has already set all-time highs several times. The first time was at the end of 2017, when the cryptocurrency industry experienced its first boom. For the second time, the LTC price peaked in 2021.

The project continues to evolve, and a team is working on it. This provides some support for LTC. In addition, Litecoin, like bitcoin, acts as a means of payment. Despite the fact that its popularity is not as high as the first cryptocurrency, transactions conducted in the network and the demand for LTC increases its price from time to time.

The Litecoin cryptocurrency is also attractive because it has a lower entry threshold for mining. It is a kind of mini-Bitcoin. With almost the same characteristics of both cryptocurrencies, miners do not need to build expensive farms to mine this token.

Litecoin is of some interest to both traders and long-term investors. It is possible to buy Litecoin in 2021 at a price that is still far from its peak values. Accordingly, there is a possibility of reaching or even exceeding historical highs in the future.

Litecoin can become an aggressive instrument with good growth potential in portfolios.

It is also interesting and profitable enough to mine this coin.

Where to buy, exchange LTC for rubles

When buying any cryptocurrency, it is important to pay attention not only to its value, but also to the future rate. It is recommended to be careful in choosing a trading platform. While there are many offers today on how to buy, withdraw, exchange, and even sell Litecoin cryptocurrency, not all of them are trustworthy.

One of the most reliable offers is buying cryptocurrency on the Broex platform. This is a modern trading platform with a simple interface. You can buy tokens here in a few clicks.

Broex is registered on the territory of the European Union and has a license for financial activity. This makes the platform a safe and reliable partner for those who want to buy Litecoin cryptocurrency for rubles.

The advantages of buying tokens on the Broex platform include:

Litecoin cryptocurrency is a promising financial instrument that can be used for both short-term speculation and for long-term investments. The growth in popularity of the token will ensure an increase in its value in the future.