Near Protocol blockchain is a platform for smart contracts with a simple toolkit for decentralized application developers. The network is Ethereum-compatible. Near Protocol uses the sharding mechanism (a method of separating and storing a single logical data set as multiple databases) Nightshade with the block creation mechanism Doomslug.

About Near Protocol blockchain

In our review of the Near Protocol cryptocurrency, we cannot avoid the question of what this blockchain is and how it works. As mentioned above, the underlying mechanism is sharding - data is divided into multiple databases, which allows any project to scale without losing throughput of the network and provides a high rate of information transfer (up to 100,000 transactions per second).

History of Near Protocol

The idea for Near Protocol cryptocurrency dates back to 2018 as part of the startup accelerator Y Combinator. Developers Alexander Skidanov and Ilya Polosukhin proposed their idea of a platform that could scale better than any modern blockchain.

After the developers announced the idea, they managed to get a team together fairly quickly, as well as to raise $15 million as an investment for development even without a finished product. Throughout 2018, the project team grew pretty quickly to 50 people.

The blockchain was released in October 2020. And the team transferred some management rights to the owners of the cryptocurrency Near Protocol. The Near Foundation was also created to monitor the design and development of the project.

It includes not only prominent representatives of the cryptocurrency community, but also Near Protocol blockchain co-founder Ilya Polosokhin. Once the foundation emerged, Near protocol evolved into a DAO (decentralized autonomous organization in which decisions are made based on voting).

How the Near Protocol blockchain works

The network is based on the Delegated Proof-of-Stake (consensus mechanism, in which a certain number of tokens must be held in a wallet to become a node owner), using sharding to improve efficiency.

Unlike the sharding used in other blockchains, such as Polkadot, all shards (a group of cells) are considered as part of a single blockchain. By using Rainbow Bridge, the Near Protocol cryptocurrency blockchain interacts with the Ethereum network.

In addition to sharding, the blockchain uses the Doomslug consensus mechanism. It allows nodes to generate blocks one by one. New blocks are created every second. And the validation turn changes every 12 hours.

The reward for running a validating node in the Near blockchain is calculated on an inflationary model. At the time of writing, 90% of the funds are distributed among the owners of the nodes, as well as those who invest in staking pools. 10% of the tokens generated from the creation of a new blockchain are sent to the Near Foundation.

One way to profit from investing in this blockchain is staking (similar to mining, a user stakes a certain amount of cryptocurrency as collateral to create new blocks in the network and validate transactions).

To get a node, it is necessary to stake a certain number of Near Protocol tokens. And their exact number is determined by how many coins are already stored by other validators within the same shard. This also determines the amount of reward each staker receives at the end of every epoch (12 hours).

There are 100 seats on each shard. In order to become a validator, you must buy at least one seat. The value of each is determined by the total number of Near Protocol tokens being staked in that shard.

If the user has insufficient funds to "reserve" a place in the shard, he may contact other members of the network through the community, who will delegate the necessary amount of tokens to him. That is how pools of tokens are created.

The principle of project management in Near Protocol

The design and development of the network is managed by the community. All proposals that are made by the community members are voted on, discussed and, if appropriate, executed by the developers.

At this point, the entire blockchain operates as a single shard. If the community finds it necessary to add new shards, the automatic Dynamic Resharding mechanism will create them.

In addition to the community, the network is managed by the Near Foundation. It decides on the sponsorship of development for the ecosystem, hiring new people to keep the protocol running, and the overall management of the project.

Benefits of Near Protocol blockchain

The pros of this network include:

The project held an ICO (Initial Coin Offering) in August 2020. More than 120 million tokens were sold during the online event. This amounted to about 12% of the total issue. 17% of the remaining 88% went to various marketing and community outreach programs.

Application of Near Protocol tokens

There are several ways to use coins of this distributed ledger internally:

Despite the fact that blockchain has appeared relatively recently, several interesting projects have already been launched on it:

Prospects of Near Protocol project

Considering the prospects of cryptocurrency Near Protocol, it's worth noting that the blockchain has already made itself known. On the basis of the platform, two projects in the field of NFT were released (at the moment, this is a very popular direction, with turnover reaching billions of U.S. dollars). Given the attractiveness of blockchain as a platform for developing new apps, it's just a matter of time before new partners emerge.

In addition, demand for blockchain from developers will be supported by the relative ease of creating smart contracts. Teams are free to use any programming language they are familiar with.

The platform implements ready-to-use application templates, which greatly simplifies the process of creating new dApps. This will lead to a large number of interested developers in the future. Therefore, the forecast for Near Protocol cryptocurrency is positive.

Blockchain uses an unusual system of transaction validation, through which a network with almost unlimited scalability and high transaction processing speed can be achieved. This should have a positive effect on the future prospects of Near Protocol cryptocurrency. 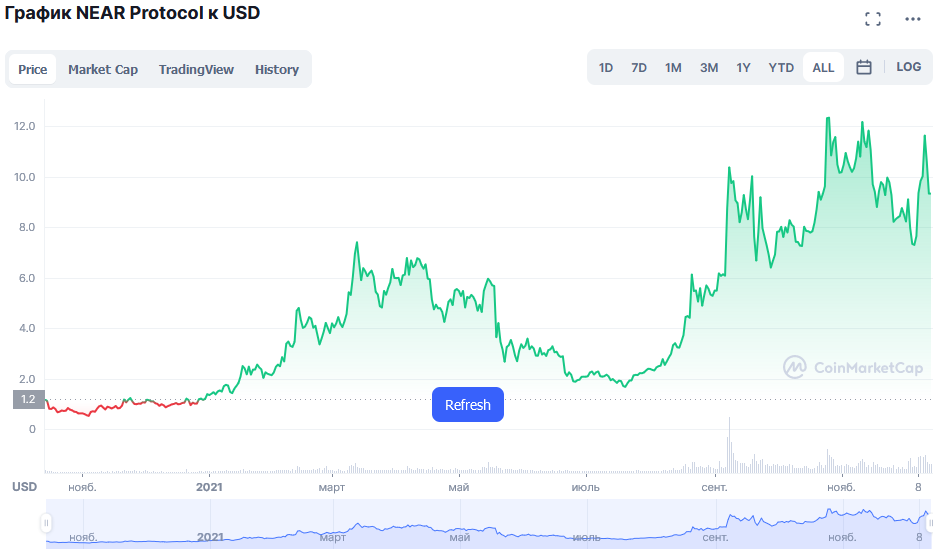 Where to Buy Near Protocol Cryptocurrency

There are many ways to buy tokens of this project. The most reliable and secure one is to buy Near Protocol on the Broex platform. The platform offers the following advantages to its customers: