What are Bollinger Bands in trading? It's a popular tool of technical analysis. An indicator that allows you to curb volatility. The favorite instrument of stock and cryptocurrency traders. Today we will introduce Bollinger Bands for beginners, its application, alternatives and, of course, the developer himself.

The history of Bollinger Bands - also known as Bollinger Lines - started in 1984. That was the year when trader and analyst John Bollinger had the idea to develop a new tool based on perhaps the most popular technical indicator, the moving average of the price, and the Keltner Channel, developed by Chester Keltner two decades earlier. 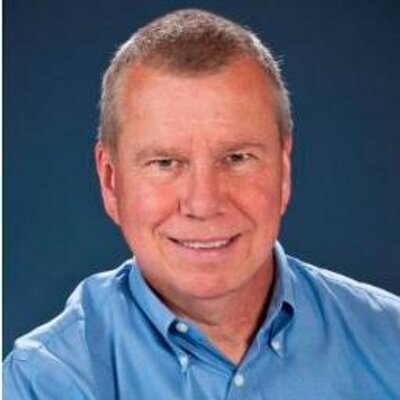 The idea was not implemented immediately - John Bollinger presented his brainchild to the public in the early 1990s. Nowadays, it is widely used by technical analysts, integrated into automated trading systems by developers, and written about by the honorable authors of the Broex team. But why just write about it? Simple and understandable charts can be easily found in the Broex app.

By the way, for the first time presented to the public, the concept had no name. One of John's interviewers drew attention to it. And he suggested: "Let's call them Bollinger Bands".

Such a simple and uncomplicated story of calling one of the most recognizable market instruments.

How Bollinger Bands as a trademark appeared

Bollinger Bands have caused a lively interest among supporters of technical analysis - the one by which traders study price movements and trading volumes. But the experienced trader himself is a supporter of the direction, which he called "rational analysis" - a discipline at the junction of technical and fundamental analysis.

But John's contribution to the development of trading doesn't end with the creation of rational analysis and self-name bands. He is one of the pioneers of computerized technical analysis. John bought his first desktop computer back in 1977 and immediately got down to business - he created a Group Power system, which determined trends in various industries.

John was one of the first traders to understand the power of the Internet. In 1996, he joined equitytrader.com, one of the first websites worldwide, where traders could access market charts and indicators.

Nowadays, John Bollinger is one of the most famous traders, the holder of many awards and the president of Bollinger Management Capital fund. He is also one of the active participants of the cryptocurrency community, making predictions about the possible decline or rise of Bitcoin.

How do Bollinger Bands work

To describe it simply, Bollinger Bands is an indicator that shows the volatility (how much the price of an asset is changing at a given moment in time) of a particular stock, cryptocurrency or other asset.

It consists of three lines. If the upper and lower lines move away from the middle line - expand - it means that volatility in the market is high. If these sideways lines are close to the midline - the chart is narrowing - it means the market is quite stable.

As we have already noticed, there are actually three Bollinger Bands. The one that is always located in the middle is the moving average. Moving Average (MA) - is a full-fledged trader's tool, which can be used independently. It reflects the average closing price for a selected period.

Let us give a little more attention to this tool. MA allows you to determine the trends, both short-term and long-term. MA5 is a moving average that covers 5 candlesticks on charts that helps to identify short-term trends in the market. Larger lines - up to 20 candlesticks - are used as well.

John Bollinger himself recommends using 20 periods or candlesticks to make any trading decisions. But what is a "period"? The essence of a candlestick is to show the difference between the opening and closing price of one trading day. In contrast to stock markets, everything is much easier with cryptocurrencies: here every day is a trading day.  Therefore, when we say MA of 5 candlesticks or simply MA5, we mean the 5-day line.

And what about the two sidelines, which now converge and now diverge from the middle line in Bollinger Bands? These are the same average lines, but at a distance equal to two times the root mean square of the deviations, or Standard Deviation. John's advice is to set two standard deviations up and down from the sliding band.

With this setup, about 95% of the market prices of an asset will be inside the bands and about 5% will be outside the bands.

Applying Bollinger Bands in one of TradingView charting strategies

What are Bollinger Bands used for?

Bollinger Bands is not only an indicator of market volatility. The tool is also an oscillator, which allows you to determine whether the market is overbought or oversold.

Of course, it is worth buying an asset when its valuation is low.

The indicator is also used to determine the trend reversal - the change of trends. To do this, you need to follow several steps: 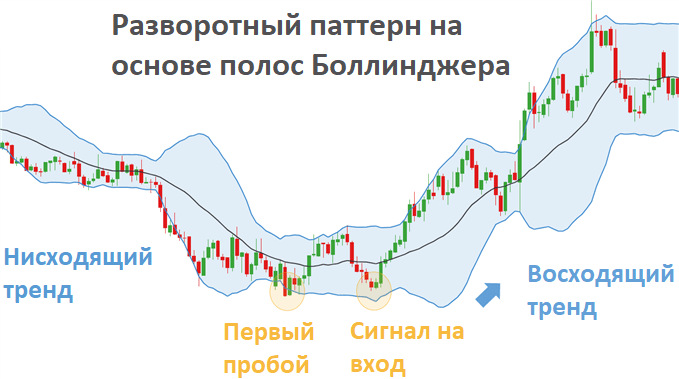 Let's look at an example: we've identified that the first trend is down. We've waited for the first breakdown of the bottom band. Then we' achieved the second bottom, which no longer breaks through the bottom line. Now we can enter the market being sure that the uptrend will follow.

How to set up Bollinger Bands?

What about deviations? Two standard deviations - StdDev - are considered the gold standard: they cover 95% of all prices in the market, giving the tool the necessary accuracy.

Keltner Channels serve as an alternative to John Bollinger's instrument. Its creator is the experienced trader Chester Keltner, who presented his development in 1960.

The idea behind it is the same as the later invented John's indicator. It is based on the exponential moving average - EMA. Another difference is that not the standard deviation, but a special indicator - ATR (Average True Range) is used to measure the channel width.

At least, that is what the popular modified version by the algorithmic trader Linda Raschke looks like. In total, there are several known versions of the tool.

Keltner Channels can be used for the common task - determining the trend reversal. In comparison to Bands, Channels are smoother. They are used in the strategies for trend detection and following the trend.

Although John Bollinger's development has gained greater recognition and is more frequently used in trading tools, both indicators have deserved a high estimate.

Bollinger Bands is an effective and at the same time quite accessible tool for beginners. It helps to monitor the market situation - to determine the change of trends and volatility. The latter is especially important for the digital assets market. The trader, who knows about increased volatility, can better manage the risks and get ready for arbitrage trading - making profit on price differences.

The tool can be easily set up and has been tested by many traders over the decades, receiving well-deserved praise.

The only thing left to add is that to begin successful trading with Bollinger Bands, Keltner Channels, and other tools, you need, of course, the assets themselves. Just like Bollinger Bands, Broex Wallet is a tool that will surely satisfy both beginners and even experienced traders:

All you have to do is take the first step. And if you've finished this article, you're probably on the right track!

If you want to learn more about blockchain technology, legal aspects and subtleties of trading, then definitely check out our Blog.