Cardano is a multilayered, decentralized smart contract platform with many different features. The sophisticated module organization in the first-to-market will allow delegating the network, using side-chains and lightweight client structures.

The ecosystem is based on a modified version of the Proof-of-Stake consensus algorithm, Ouroboros. The consensus is reached with the participation of token holders with sufficient participation in the network, as in the case of classical PoS.

Other parties also participate in the process:

The project is also working on modifying the current algorithm. Ouroboros Praos is an initiative to modernize Ouroboros to reduce the time for block creation on the network. Ouroboros Hydra is another improvement offering the use of sharding. Sharding allows multiple Ouroboros epochs to run simultaneously, greatly increasing Cardano's throughput.

Although the project has no White Paper, the developers are not hiding their plans from the community. Reportedly, the full-scale implementation of Cardano will take place in five phases: Byron, Shelley, Goguen, Basho and Voltaire.

The first era, the Byron era, came in September 2017 simultaneously with the launch of the main Cardano blockchain network. At that point, the blockchain operated as a federated network, supporting only ADA transactions.

The next era, Shelley, came three years later in July 2020, bringing Cardano's proposed Ouroboros Proof-of-Stake (PoS) protocol to life. The deployment of a third phase, Goguen, is underway, which will add support for smart contracts and the ability to issue custom tokens.

In the Goguen era, Plutus will create a framework for smart contracts capable of modeling enterprise-level business and financial scenarios. In addition, Plutus and Haskell allow the same codebase to be used both on and off-chain, whereas other smart contract implementations often require developers to use two or more different languages, which reduces efficiency and increases the potential for costly errors."

The Cardano, IOHK and Emurgo development teams are exploring and building the remaining phases of the network, Basho and Voltaire, in parallel with Goguen:

The Basho era will focus on optimizing the network for scalability and interoperability. Its aim is to improve Cardano's underlying performance to better support the growth and deployment of transaction-heavy apps.

The two main developments proposed for the Basho era are sidechain and parallel accounting style. Sidechains are new blockchains (e.g., shard chains) that interact with the underlying network chain. They can help take the load off the underlying layer to increase overall network capacity and scalability through parallel computing.

Once Voltaire is launched, suggestions for improving the protocol will come from community members, not just IOHK and Emurgo management. Token holders, either through direct bids or a delegation system, will be able to vote on what proposals the network should implement. The network will also add a treasury system in which a portion of all transaction fees will be pooled to provide funds for the development of activities carried out after the voting process.

Cardano is positioning itself as a "third generation" protocol after Bitcoin and Ethereum, which offers more advanced and enhanced features than previous generations. 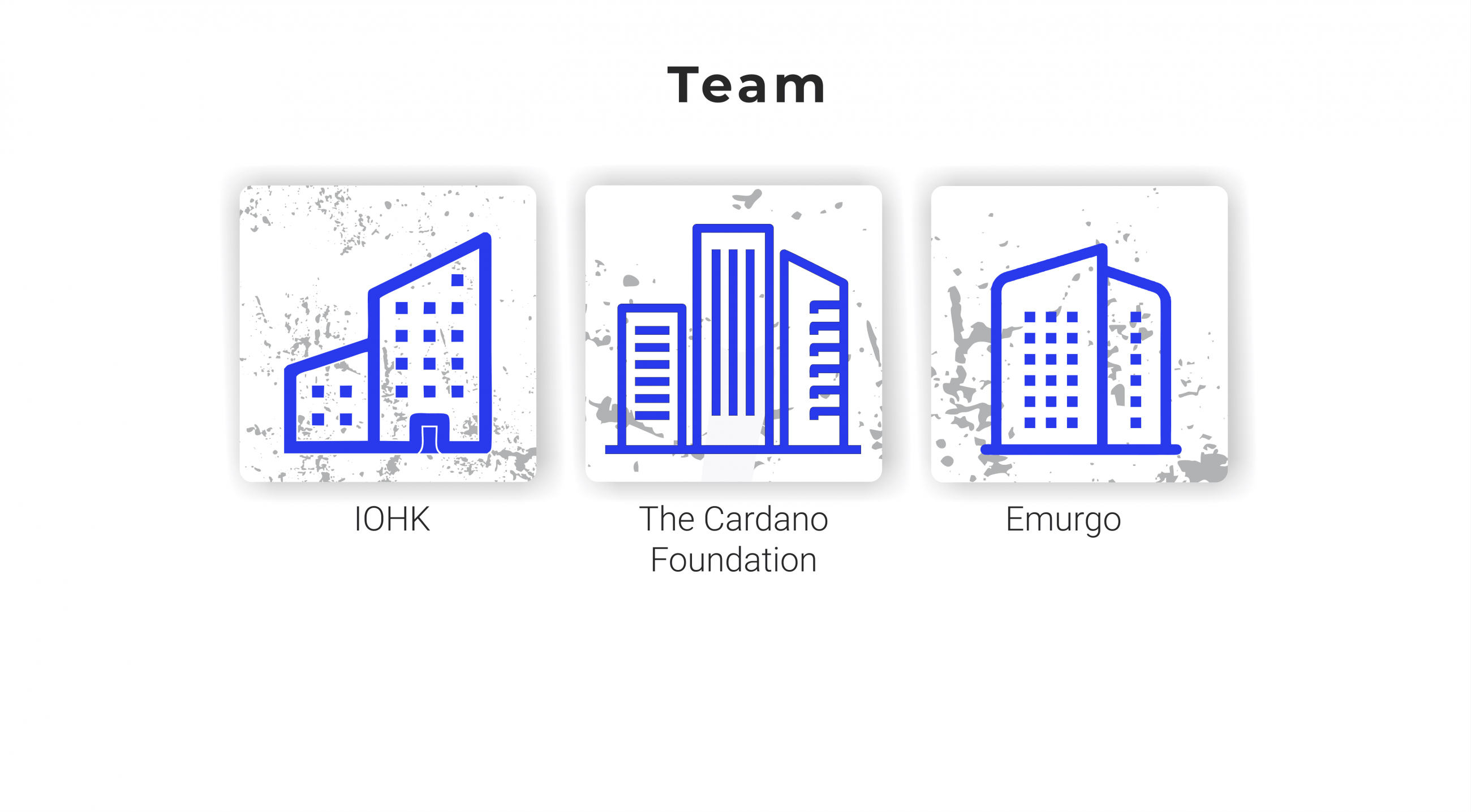 The decentralized Cardano project is currently supported by three organizations: IOHK, The Cardano Foundation, and Emurgo. IOHK, a blockchain research company also founded by Charles Hoskinson with the support of Jeremy Wood, oversees the development of the ecosystem.

Cardano Foundation is a non-profit organization focused on the core and development of the Cardano ecosystem. Emurgo is a Japanese venture capital firm.

The project's native token, ADA, is used for several purposes:

As the ecosystem evolves and dApps appear on the Cardano network, the token will get more uses in DeFi protocols. 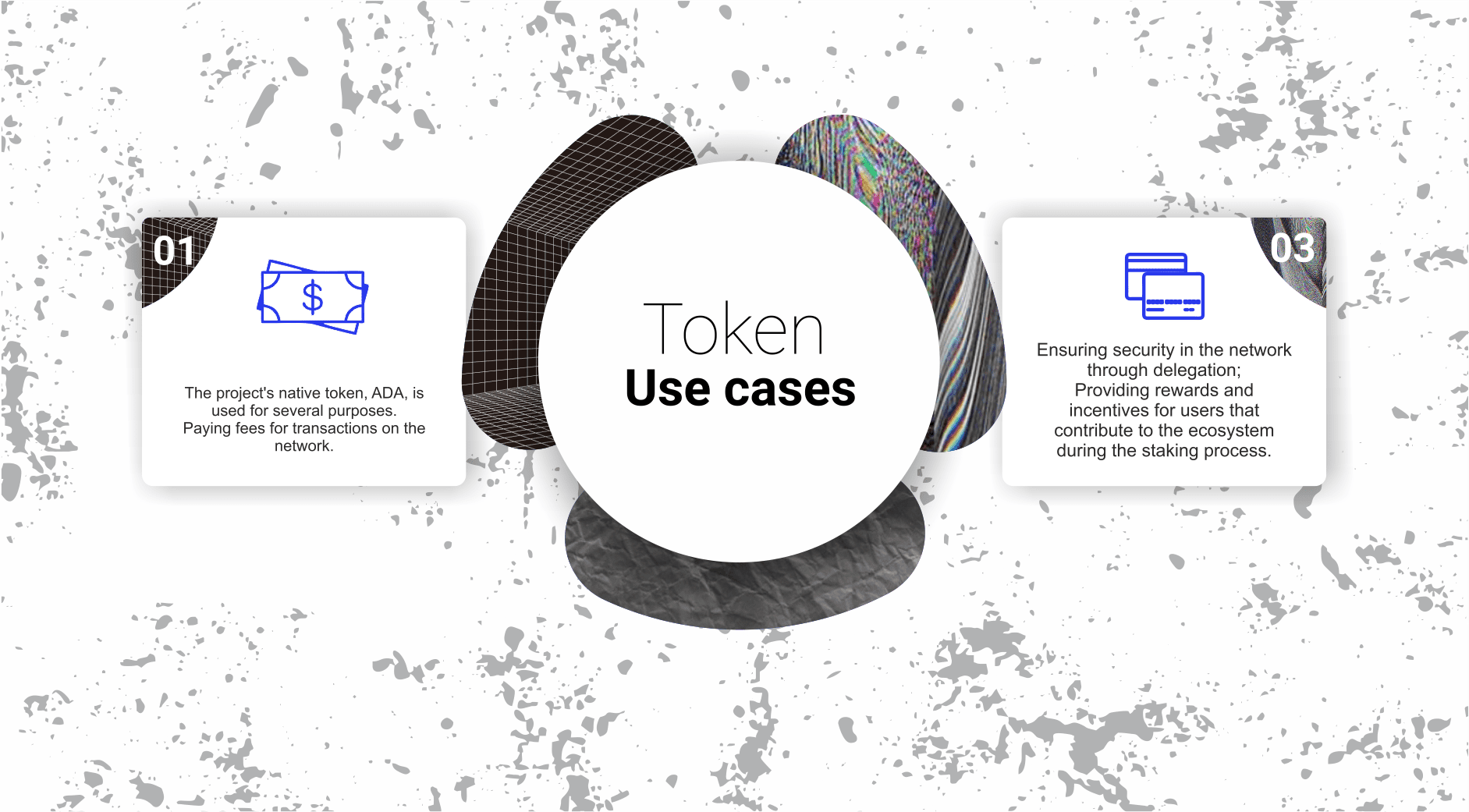 Cordano is also planning to deploy its blockchain technology at the enterprise level in the areas of education, digital identity, logistics, healthcare, and already has various products to address high-priority issues in these industries. 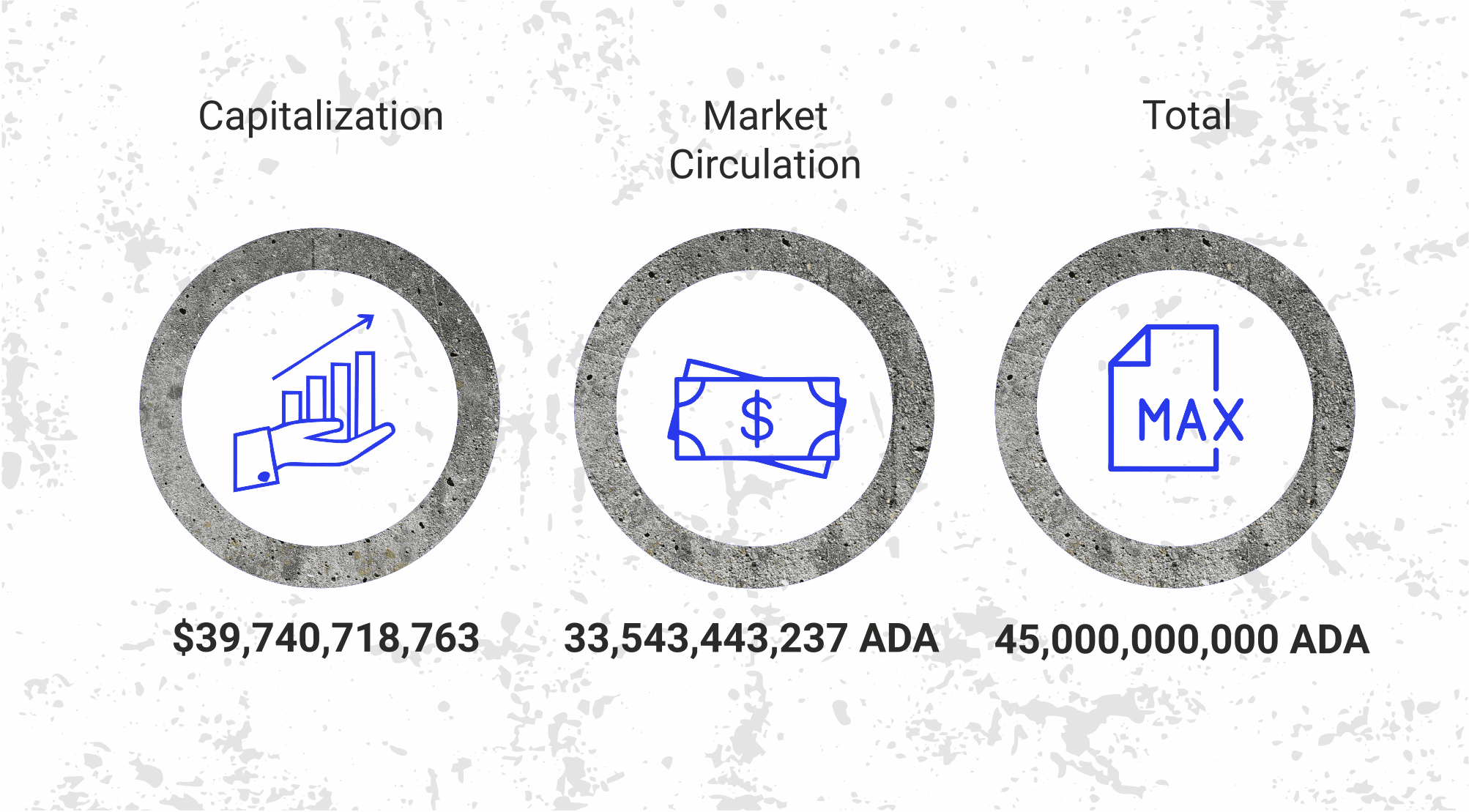 The Cardano project began development and promotion in 2015. From 2015 to 2017, the team distributed 25.9 billion ADA vouchers in a public token sale - participants could exchange vouchers for cryptocurrency through the Cardano Daedalus wallet.

Those three aforementioned organizations that supported Cardano's development received 5.2 billion ADA after mining the genesis blockchain. They were distributed as follows:

The Cardano ICO took place in four stages with strict verification requirements (KYC). Initially, the target audience of the project was the population of Japan, and it was positioned as a tool to ensure a secure old age after retirement. As a result, 95% of investors at the conception stage of the project were middle-aged Japanese.

According to statistics, there are 325,604 ADA holders as of January 28, 2022. Among them, about 17% are so-called whales - users with a large share of tokens, according to Intotheblock.com reports. The top 10 addresses account for 4.36% of the community supply.

The largest wallet in the ADA network currently owns 1.37% of the ADA offering. 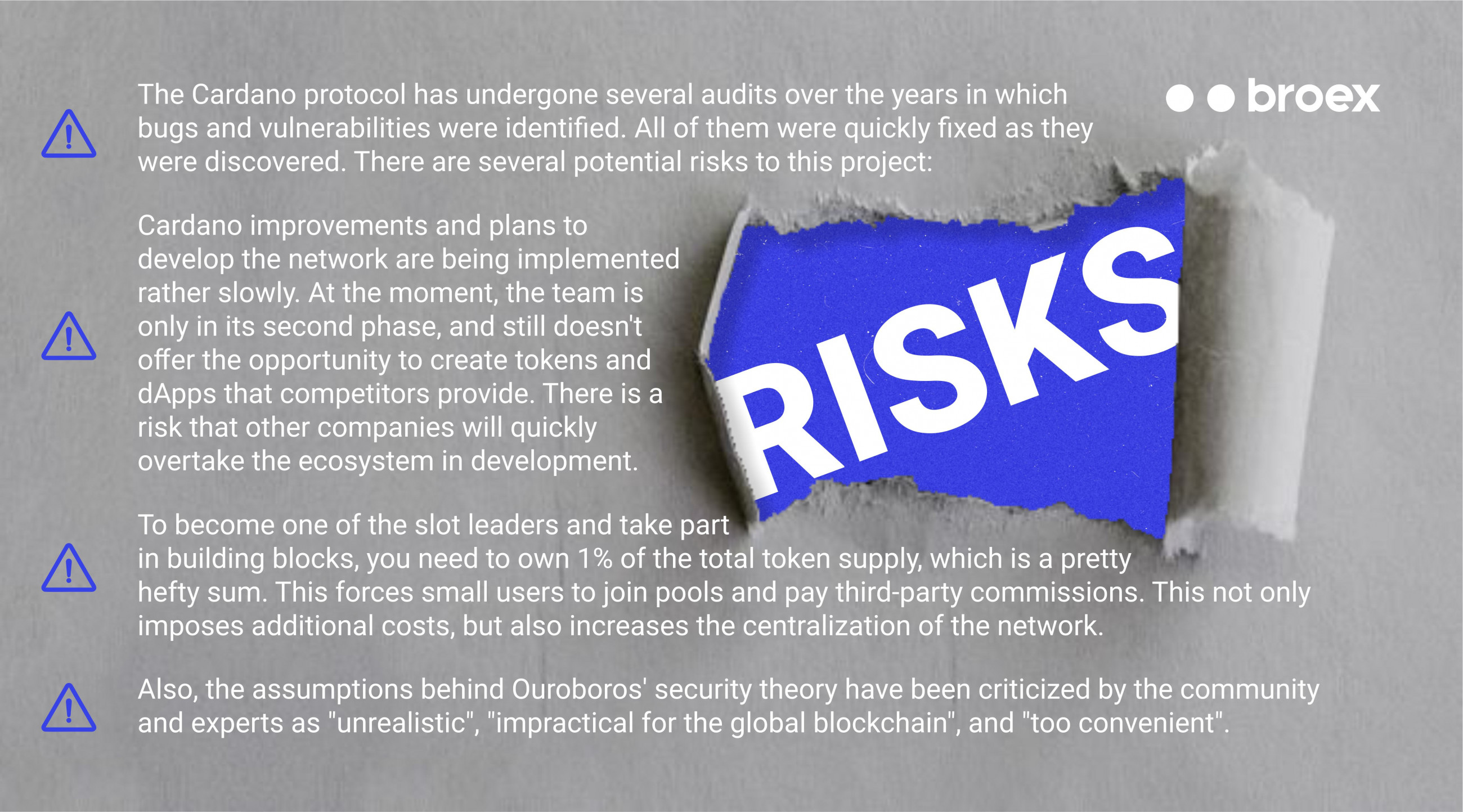 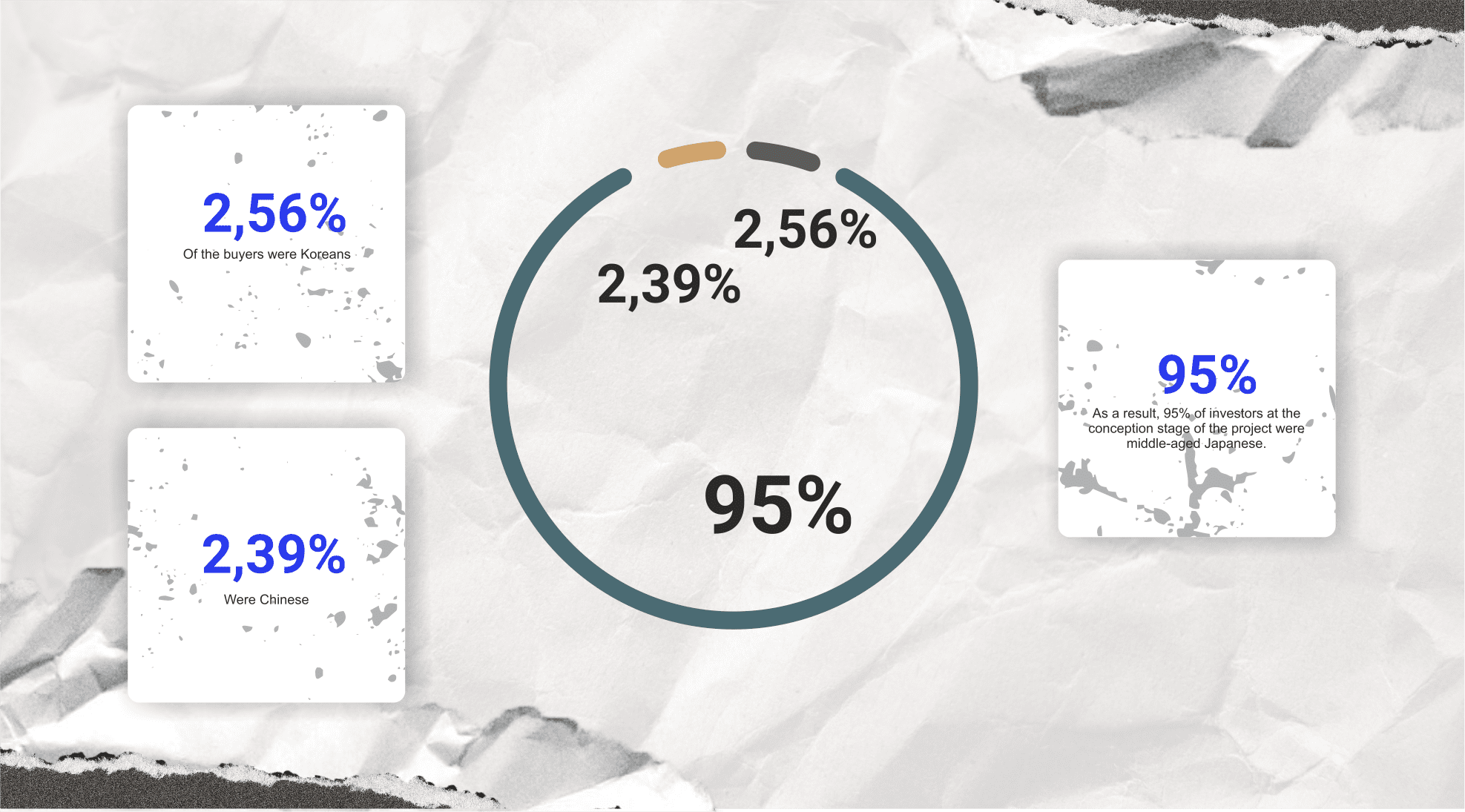 The project is ranked 7th in the overall CMC ranking and 2nd in the smart contracting networks ranking.

The prospect of the project is supported by the planning and preparation of the transition to the next phase. It is expected to introduce Cardano capabilities into business and simplify interaction for users and developers.

Large transactions (over $100 thousand) are always a reliable indicator of the demand for a digital asset. ITB's analysis of large Cardano transactions shows a relatively "stable" trend since the beginning of the year.

The protocol has an average of 220 monthly active core developers and 37,327 commits to its code, compared to 42,457 for Ethereum

ITB's Addresses Metrics indicator shows that 55% of addresses on the Cardano network are active. In addition, the ratio of new addresses entering the network to addresses leaving the network has been positive over the past periods, but has increased even more with the launch of Shelley. This indicates that the project has set the right vector in the development of its network and in the future. If the current dynamics continue, it can strengthen its leadership position.

Under conservative forecasts, the value of ADA could reach $4 in 3 years, which is ±350% of the current price of $1. 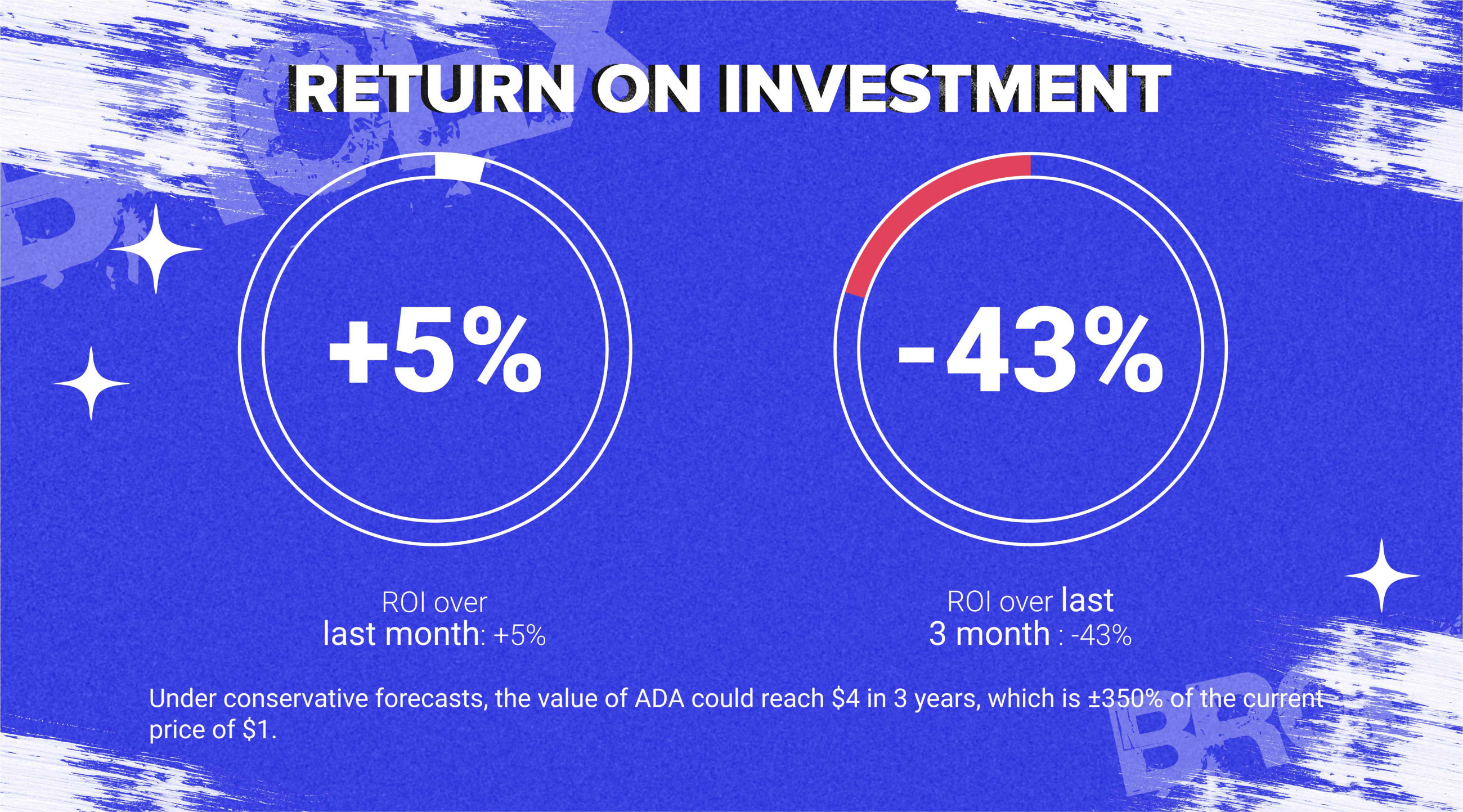