It's been an eventful year, as huge cash injections stimulated all markets, including crypto, which resulted in many assets breaking through their ATNs.

Top 25 assets that have shown the best performance this year: 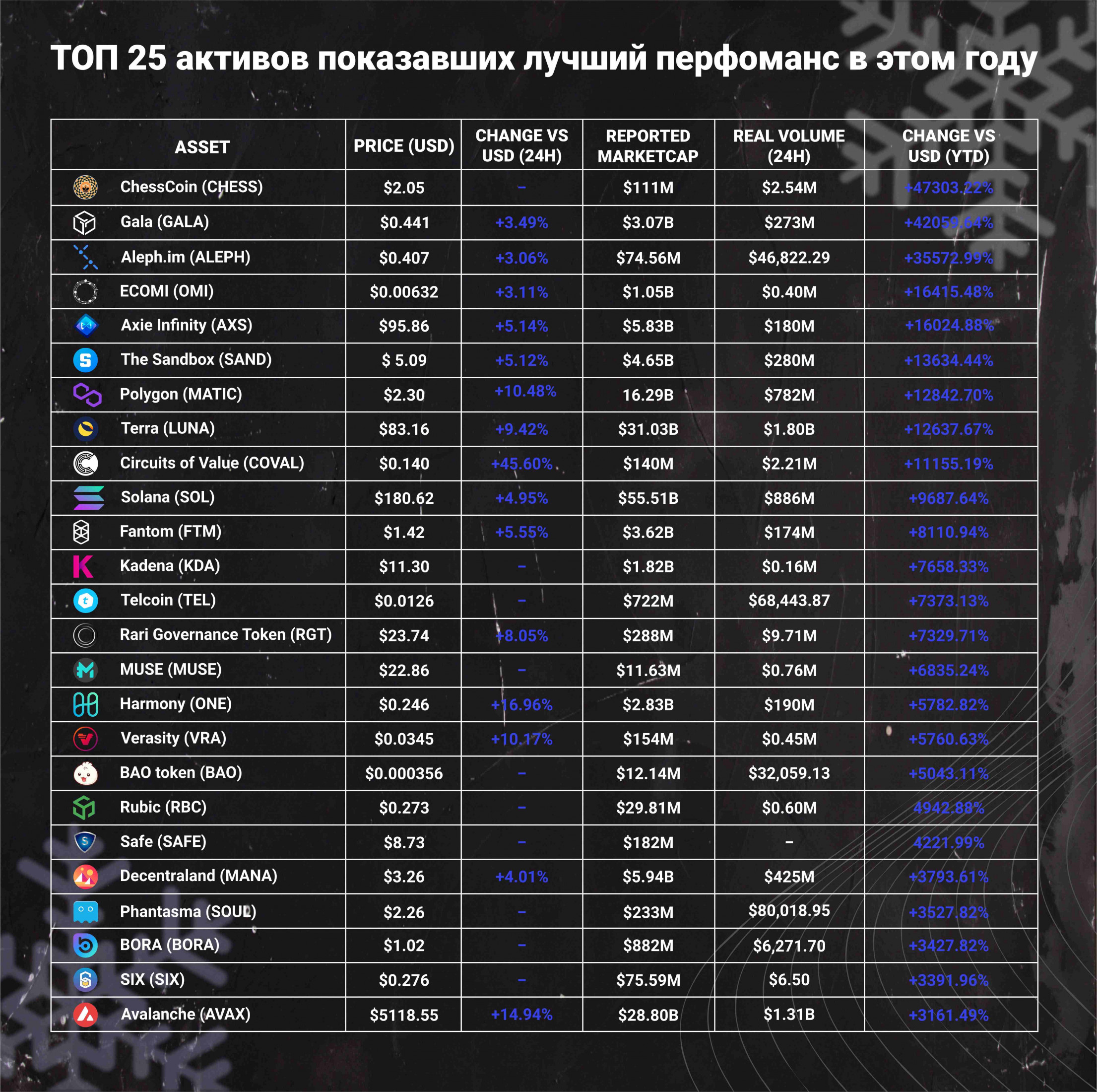 On the back of the overall market rebound, we're seeing a sharp increase in trading volume on the leading exchanges, which is incomparable to previous growth cycles. 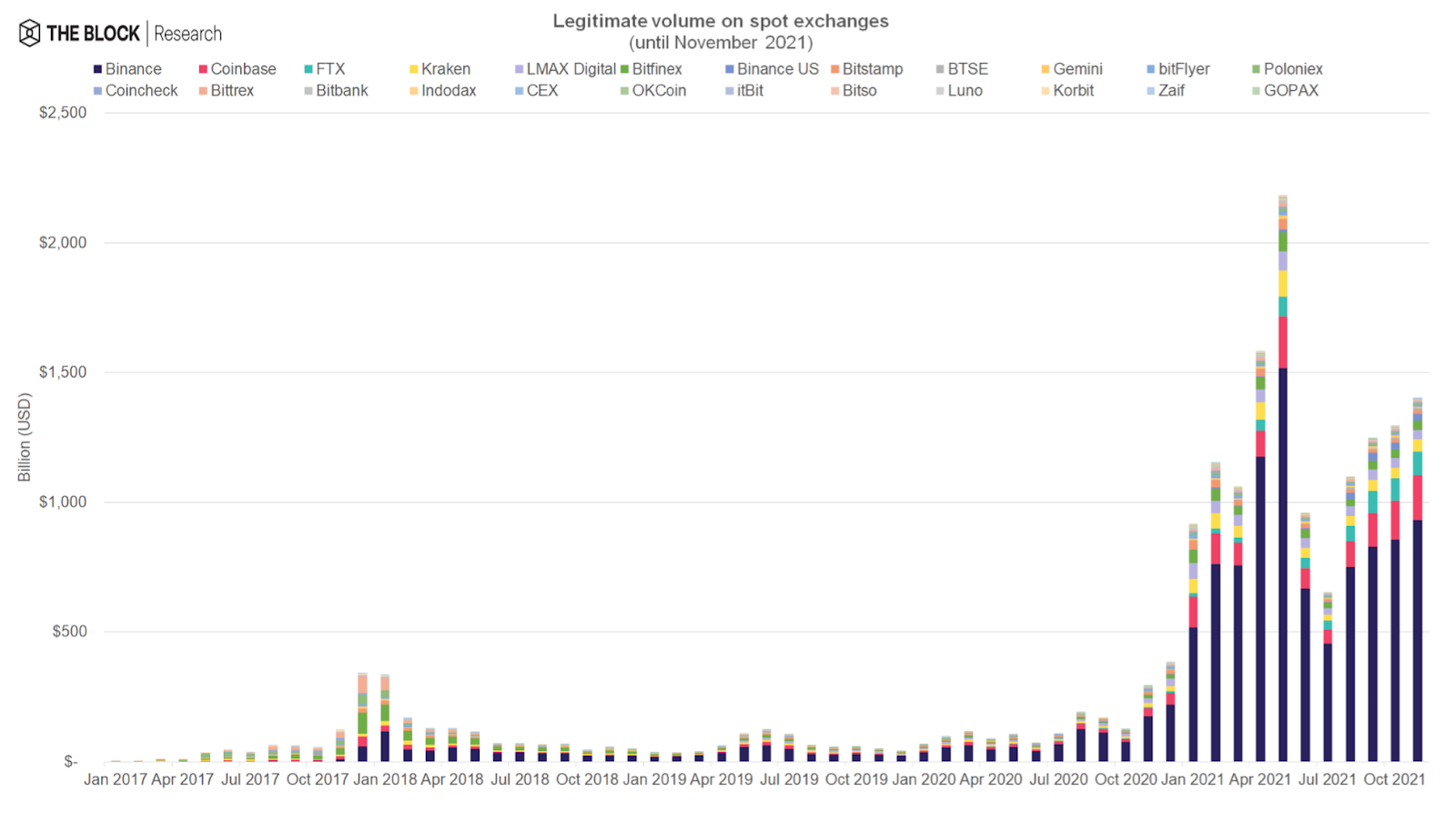 Institutional investors and venture capital funds are already here, buying up chips from promising projects at early stages that are likely to lock in profits in the new wave of hype. It will take time for projects to come up with other, fairer mechanisms to distribute their tokens to community members.

And today, firms like Polychain, Paradigm, a16z, Multicoin, 3AC and others each have billions of dollars (in some cases over $10 billion dollars) or more, and a $25 million funding check is a medium-sized deal.

Hedge funds plan to invest 7% of their assets in crypto within 5 years, and so are pension funds beginning to buy directly!

According to Dove Metrics, there were 423 deals in the 3rd quarter (to fund crypto projects) worth $8 billion in private investments. That's almost half of the total volume of all deals this year worth $17.8 billion.

And that's more than the previous 6 years all together.

Nearly 90% of the biggest deals in crypto history have taken place this year, and that's without Coinbase's direct listing.

About 75% of the funding has gone to infrastructure and centralized services.

The institutionalists are right here. And this time that's really the case.

Are you able to compare the most popular asset classes among the funds with your portfolio and draw some conclusions, if you're not stuck in meme-coins? 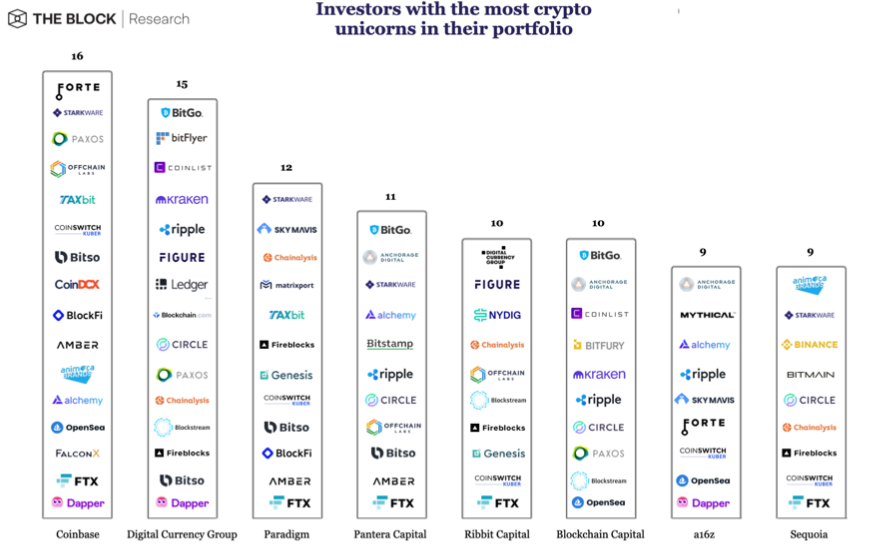 Most of the investments are in trading instruments, NFT, gaming, and financial services. It's worth taking a closer look at these areas next year. 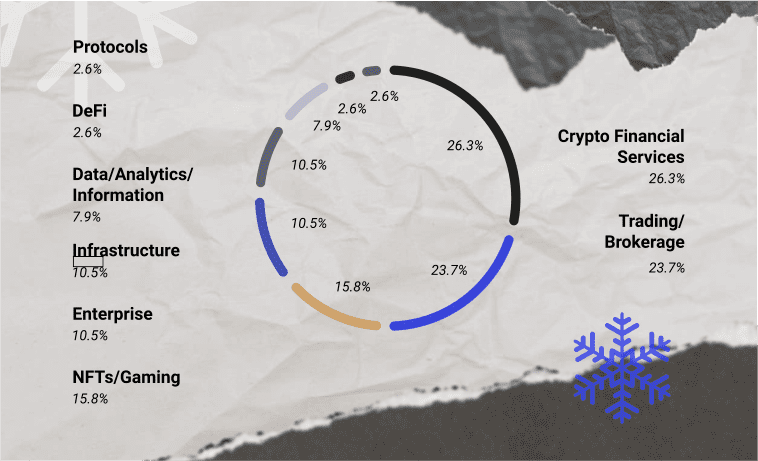 We see strong interest and acceptance of crypto-assets from developing countries. The real case is El Salvador, which has already introduced Bitcoin into the country's financial infrastructure and is planning to mine it using volcanic energy. So far it looks more like an experiment, but if it proves successful, we will see more and more states introducing the first cryptocurrency into the legal field. We may expect similar announcements from countries with high inflation and low national currency stability: Paraguay, Panama, Mexico, Brazil and Argentina.

The first city coins appeared in Miami and New York.

In 2021, the adoption of cryptocurrencies was a strategic move used by the newly elected mayors of Miami and New York City. Mayor Francis Suarez announced the release of "MiamiCoin," a cryptocurrency created by startup CityCoins, in August. Residents hold and exchange the cryptocurrency, which represents a stake in the municipality.

Those who run the software get a percentage of the coins they mine, with users getting 70% and 30% going back to the municipality. At the time of writing this article, the city has generated $21 million from cryptocurrency. Meanwhile, Mayor Suarez is actively advocating for making cryptocurrency business in Miami easier, hinting that the revenue from this initiative could allow the city to reduce or eliminate taxes altogether. 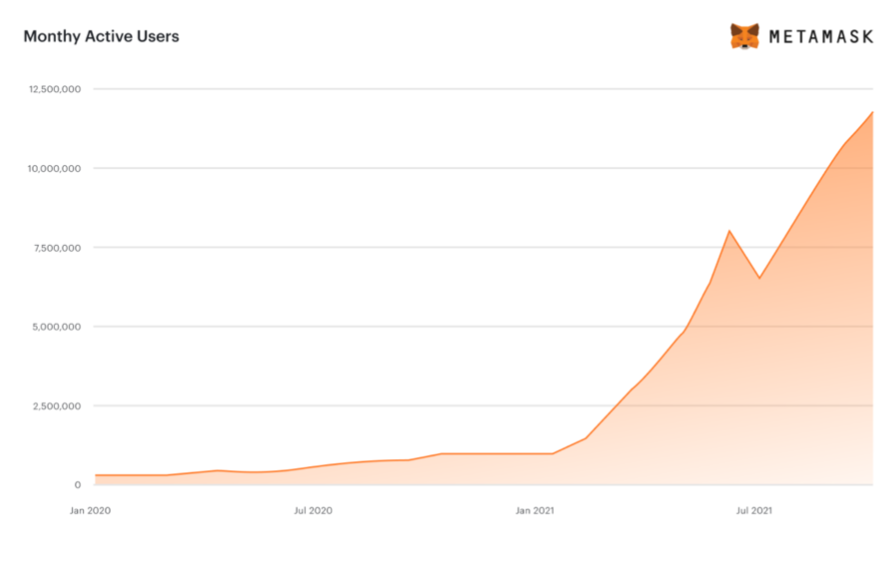 London upgrade with the ETH burning model turns it into ultrasound money with a deflationary model. Network fees are still high but with the development of scaling solutions, this will be resolved.

There are currently over 170 million unique Ethereum addresses. 2.2% of them interacted with DeFi protocols, which is 300% more than last year.

Ethereum blockchain has reached its capacity limit this year.

Alternative Tier 1 crypto platforms have increased in value 50-100 times, as investors bet on the development of crypto solutions for parallel use in new ecosystems and satisfying excess demand. 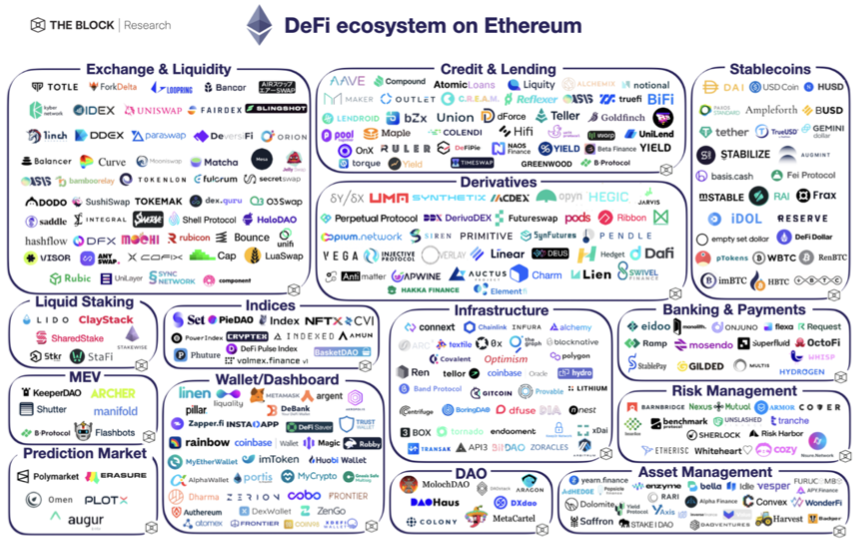 The launch of the Bitcoin ETFs shows that regulators are already thinking seriously of accepting the asset and will continue to control it.

China's mining ban has made mining more decentralized by distributing miners' capacity around the world. Many see this move as a strategic mistake by China, and the possibility of the ban being overturned remains (classic).

Web3 is a great term, covering a huge spectrum of the market and hinting at a new era of internet that is developing right before our eyes. 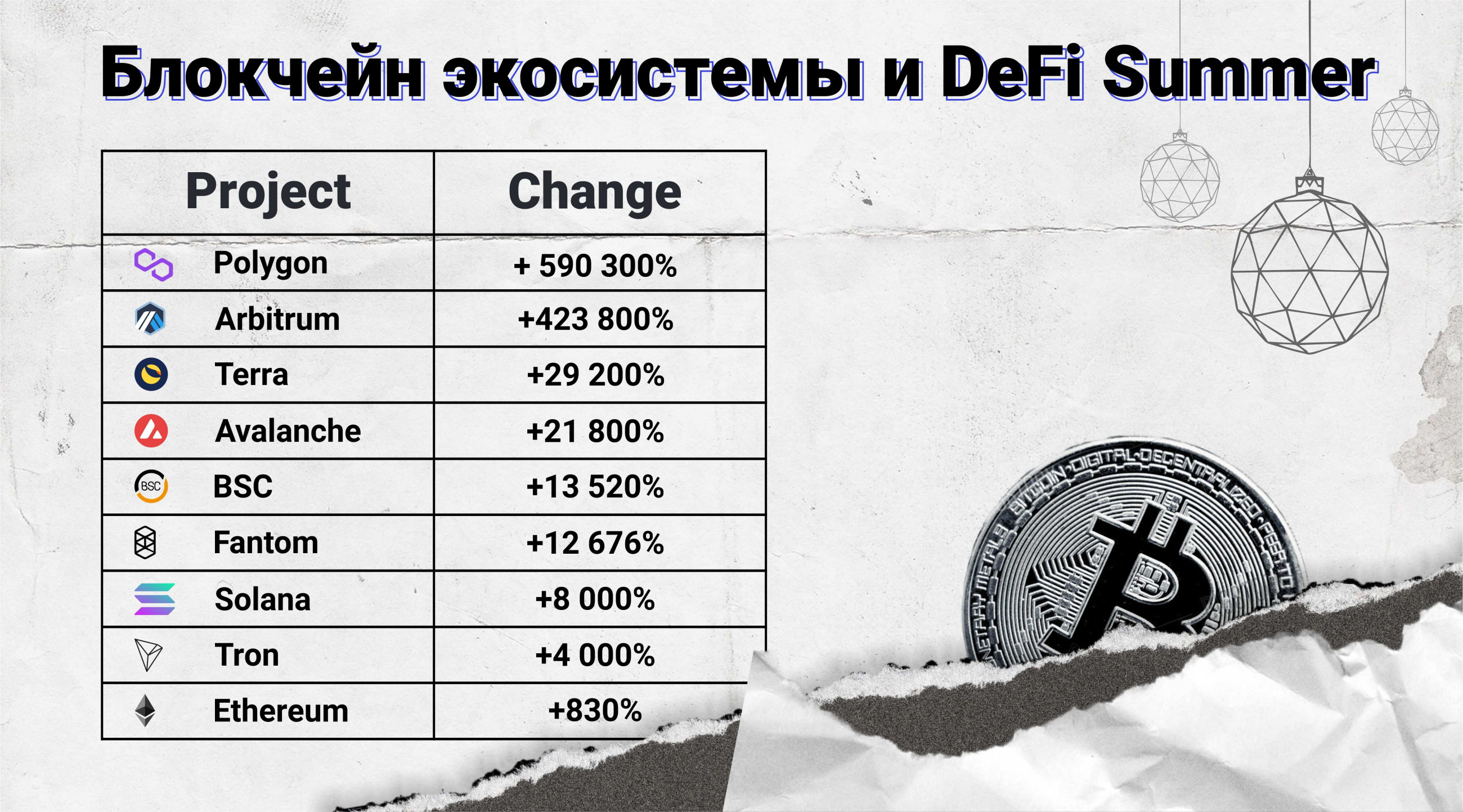 Layer-1 (L1) platforms have seen a dramatic increase in quantitative user activity this year. This is largely due to the emergence of DeFi ecosystems on various L1 platforms, including Ethereum. By comparison, DeFi TVL on L1 ecosystems grew even faster overall (+974% or $166 billion) than DeFi TVL on Ethereum (+588% or +$99 billion) (for the year).

NFTs and play-to-earn (P2Es) are blazing a new trail for the gaming business model. The opportunity to make money in games has opened up new business models, one of which is the so-called gaming guilds. Guilds provide support to players, from hiring to providing necessary in-game assets, and receive a share of players' in-game income in return. Most guilds are structured as DAOs (decentralized autonomous organizations).

This year, NFTs and blockchain-enabled meta-villages have sparked a new wave of adoption and attention to the digital asset sector, something not seen in previous cycles. Key moments included auction houses selling NFTs and using crypto-assets more widely, as well as major brands such as Adidas using NFTs to attract new audiences.

Tier 1 platforms and dog-themed "memecoins" are the winners in 2021. Two major layer-1 platforms, Solana and Avalanche, have seen astronomical returns on their SOL and AVAX tokens in 2021 - over 12,000% and 4,000% respectively.

Meanwhile, the Dogecoin and Shiba Inu cryptocurrencies, DOGE and SHIB, have seen increases of more than 4,000% and 63,200,000%, respectively. 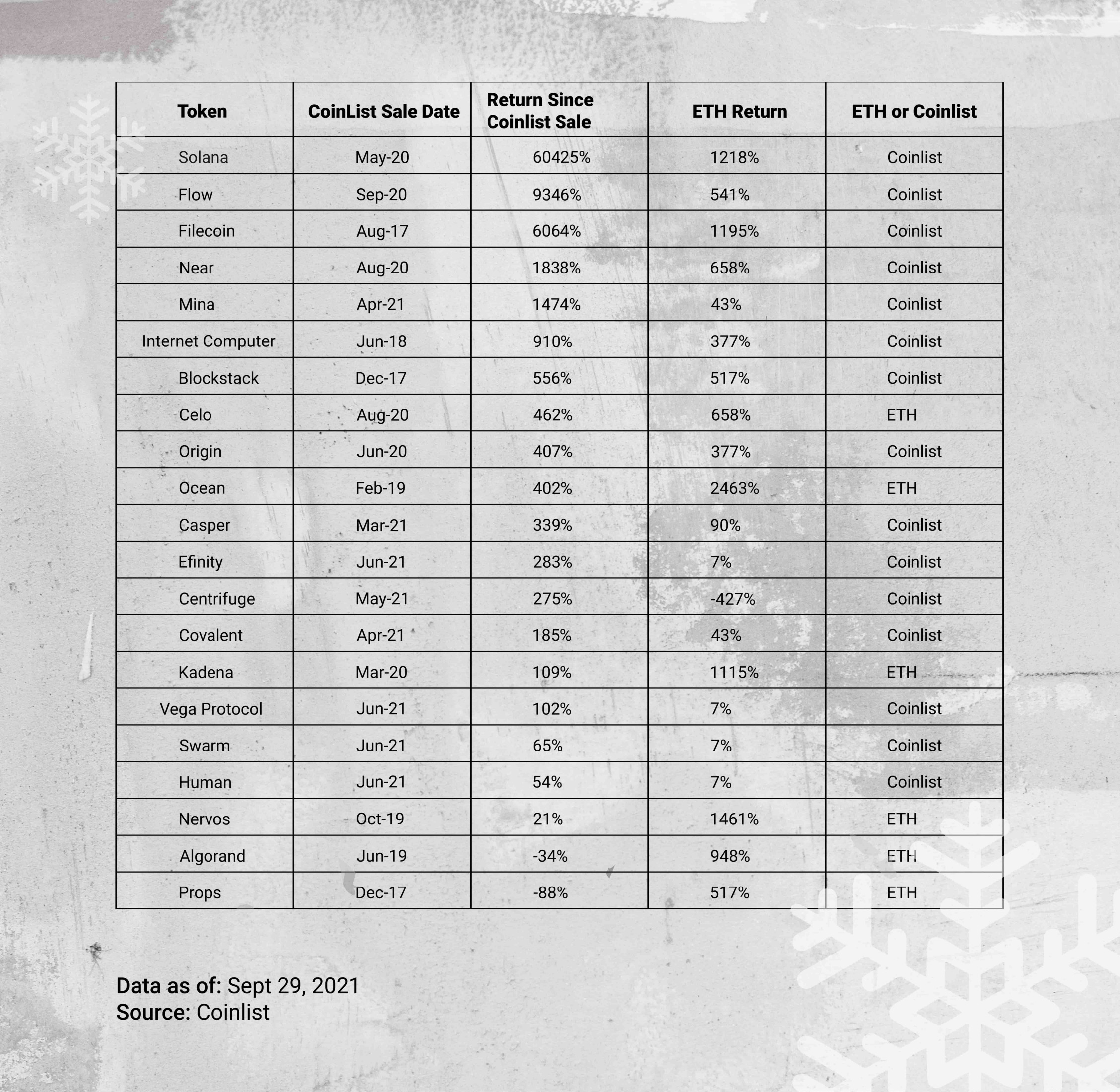 Crypto, or as it has popularly begun to be called "Web3," is becoming an unstoppable force in the long run.

Chris Dixon has called it "an internet owned by users and builders orchestrated with tokens," and describes the evolution of Web1 → Web2  → Web3 as "Read-only "  → "Read-Write"  → "Read, Write, Own".

What is setting such an explosive growth rate in the crypto industry?

The main drivers of interest in crypto were caused by a crisis of public trust in state institutions, but beyond that, there are several other factors.

We are on the threshold of a complete transformation of the world economy.

Thus, our probabilities are split between three scenarios:

What to look out for next year?

Stablecoins will take over this world and many projects are experimenting with different stabilization algorithms. 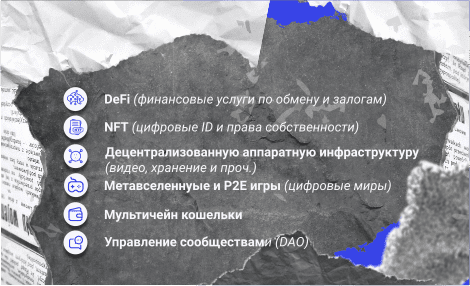 We expect growth across Web3 spectrum, but 3 areas are still underdeveloped:

TVL interchain bridging has grown significantly this year, from $670 million at the beginning of the year to more than $32 billion. As blockchain ecosystems evolve, these protocols will become increasingly popular.

Marketplaces, financial primitives, authoring tools, business models for communities and decentralized personal data/reputation management systems are all in their infancy.

As a result, the market is beginning to divide into sectors that will evolve in the new economic system of the future.

The main obstacles for public acceptance of cryptocurrencies at the moment are complexity of interaction with different protocols, political uncertainty and small number of payment gateways connecting fiat and crypto worlds.

If we look at the history of the Internet, we are now approximately at the stage of its development in 2000. The infrastructure is already there, but the user interfaces are still difficult for ordinary people to understand. We expect things to change a lot in the coming years, and new users will come to this market, which are necessary for mass acceptance of cryptocurrencies.

In crypto 1 month equals 1 year in normal life and the speed of development is amazing, so the future seems to be very close.