Ripple is a cryptocurrency payment system. Supposedly, it will be used as an alternative to traditional banking systems. XRP is the project's native cryptocurrency. It is meant to be used for money transfers, including large international transactions between companies.

Ripple is also the name of the company that created and owns most of the XRP token. In fact, it's not regarded as a decentralized cryptocurrency as Ripple owns more than 50% of all XRP tokens in circulation, as well as most of the validator nodes in the XRP network. Ripple generates revenue from current XRP sales, which account for more than 90% of the company's revenue.

According to the developers' idea, international transaction processing will become cheaper and more efficient than using SWIFT through the "The Internet of Value" - an umbrella term that combines : RippleNet products, XRP Ledger, XRP cryptocurrency and RippleX. The system should be used as an intermediary between the parties to the transaction, equalizing liquidity between fiat currencies.

Products of the company

Ripple was founded in 2012. The company was previously known as Opencoin. Now it is a technology company that develops the project's payment protocol. 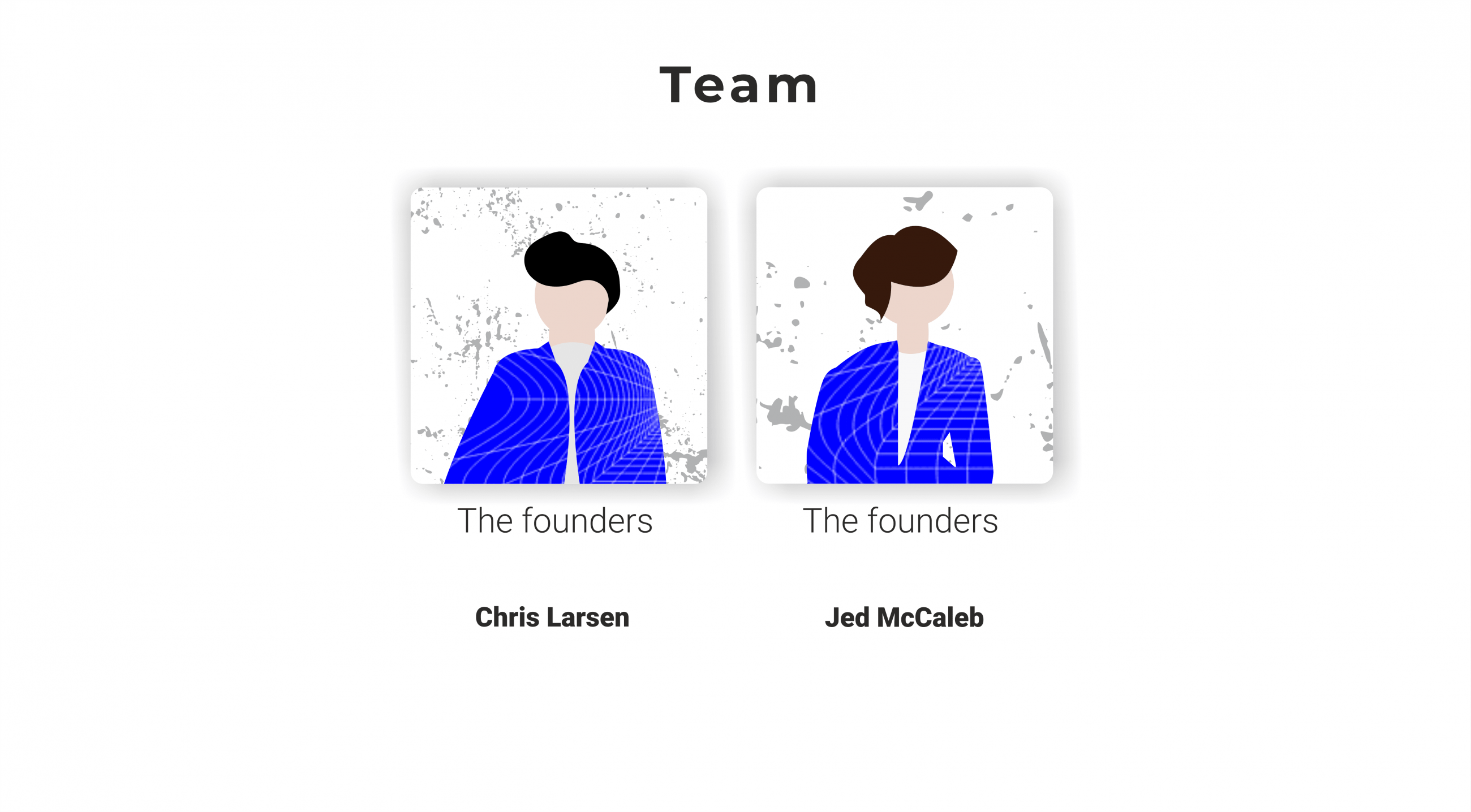 Over time, Chris Larsen remained CEO and Jed McCaleb left the project. He became the founder of the new project Stellar, also focused on payments.

The reason for Jed McCaleb's leaving were internal disagreements. After he left the team, Jed began actively selling his XRP, which caused the cryptocurrency's price to drop. A legal dispute ensued, resulting in an agreement that controls the rate at which McCaleb is able to sell his XRP.

XRP is used by financial institutions as an intermediate currency when it's necessary to exchange value between several fiat currencies. 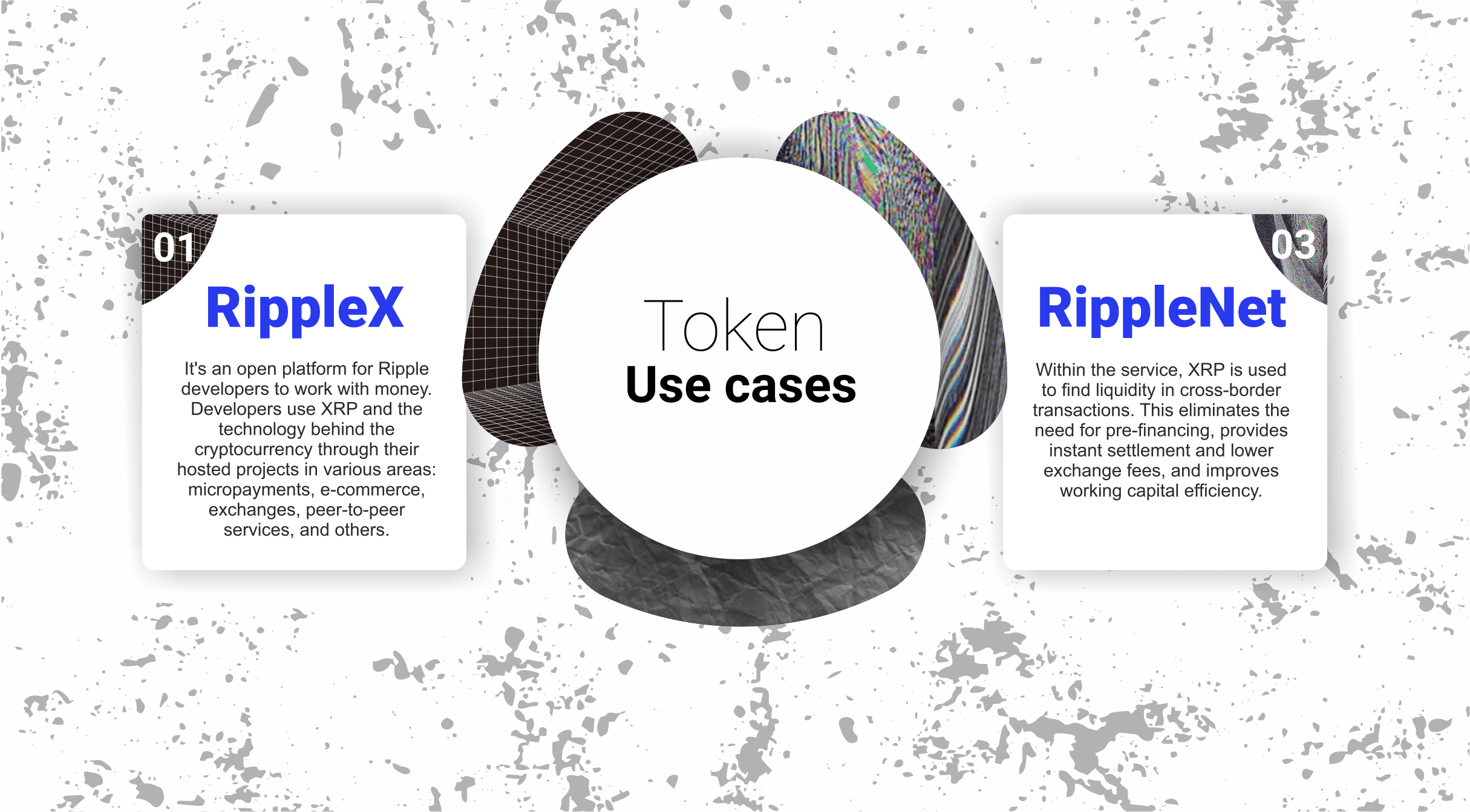 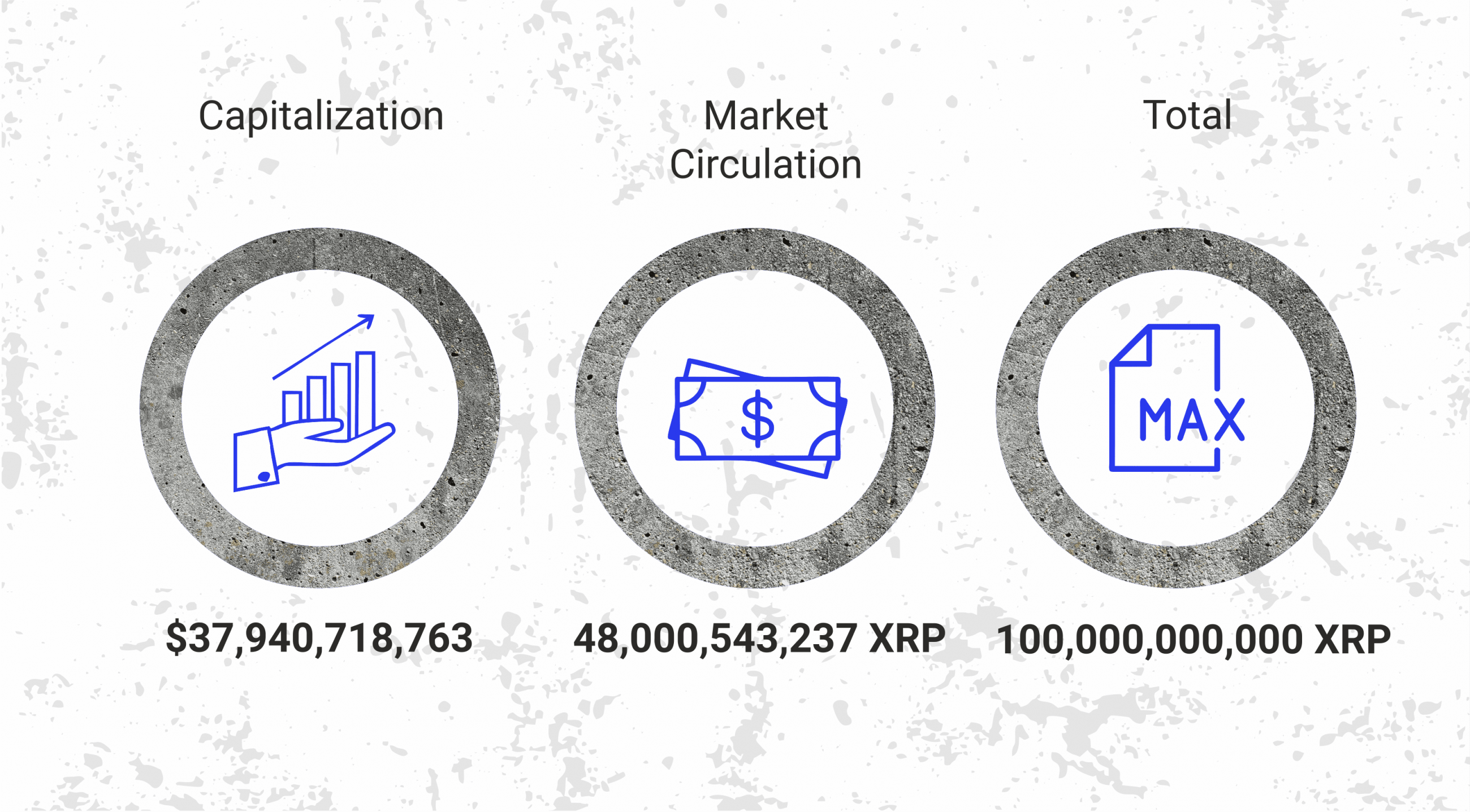 In January 2013, the pre-mined 100 billion of XRP was distributed as follows:

0.2% was given away as airdrop. This was an experimental attempt to expand the use of XRP as part of the launch.

In fact, Ripple is the main beneficiary of the project, making it too centralized.

As transactions are conducted through Ripplenet, XRP is burned to pay fees. However, the liquid and negotiable supply of XRP keeps being subject to inflation.

To keep Ripple running, 1 billion XRP is allocated to Ripplenet each month. However, unused funds are paid back at the end of the month. On average, 300 million XRPs of the 1 billion become liquid, and 700 million XRPs go back into Ripple reserves.

XRP Ledger is open source, and individuals can submit requests for network updates. However, most of the protocol development is done by Ripple's permanent development team. It also establishes the roadmap. Ripple acts as a governing body of the Ripple network, and as an advocate for it, and builds constructive relationships with governments and financial institutions around the world. 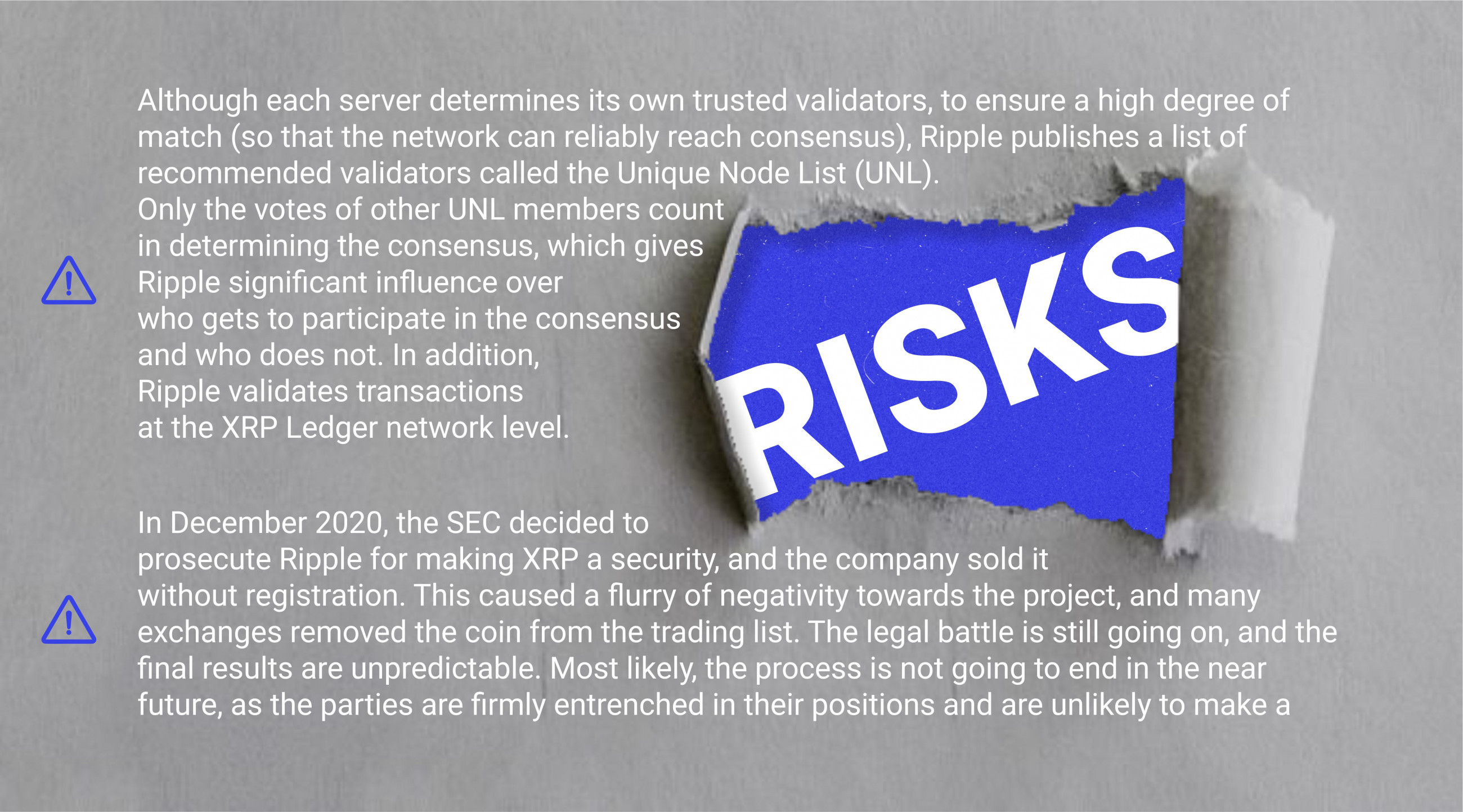 The following facts are also worth noting:

In 2019, Ripple was the subject of a class action lawsuit in which plaintiffs allege that Ripple, its affiliates and individuals, violated state and federal securities laws when they sold XRP to the public.

Ripple has many banking partnerships, but the actual use of RippleNet or XRP by banks is a common misconception. In practice, most banks are now building instant payment infrastructure based on a Ripple product called xCurrent, which has nothing to do with RippleNet or XRP.

Ripple may succeed with its technology, but it should not be considered in the same category as real cryptocurrencies like Bitcoin and Ethereum. The project team has a long way to go to prove that Ripple is a reliable, trustworthy platform for international payments.

The project is the 5th in the overall CMC ranking and the 2nd in the payment coins ranking.

The following factors speak in favor of future growth:

To stimulate the development of a robust ecosystem, XRP supports various APIs that help nodes and other third parties interact with the system based on the REST API standard.

Billing and wallet solutions allow businesses to accept XRP as a means of payment. These solutions are now starting to gain traction, as the Ripple ecosystem is the only platform that has come a long and difficult way to become a reliable and efficient payment system.

There is a traceable possibility that Ripple and its products could become a platform for central bank digital currency issuance (CBDC).

Ripple has a naturally attractive value proposition for cross-border payments, with no adequate alternative yet offered by other protocols. Ripple has the potential to become a legitimate alternative to the SWIFT system, thanks to its increased speed and efficiency. 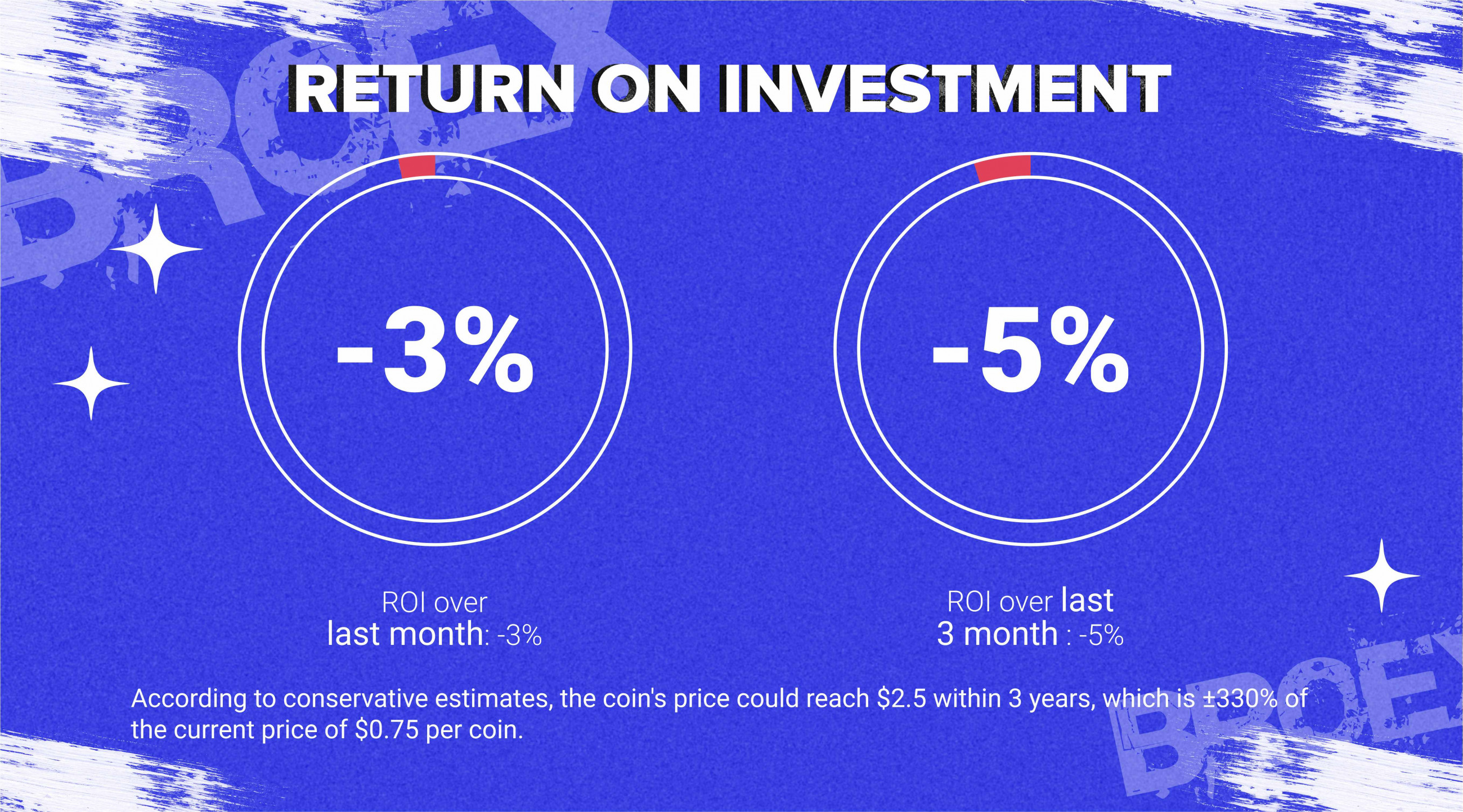 According to conservative estimates, the coin's price could reach $2.5 within 3 years, which is ±330% of the current price of $0.75 per coin.